Journeys: Mapping the Earth and Mind in Chinese Art 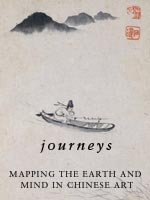 The theme of journeys, both real and imagined, will be presented in Journeys: Mapping the Earth and Mind in Chinese Art, opening at The Metropolitan Museum of Art on February 10. Featuring more than 60 works of art in various pictorial formats – hanging scroll, handscroll, album, fan, book, and photograph – the exhibition will explore the rich symbolic meanings and cultural significance of journeys as embodied in works of art dating from the 11th century to the present. The exhibition will be organized thematically: emotional partings and returns, roaming the wilderness, escapist visions and garden retreats, dream journeys, travelers, scenic sites and landmarks, and topographic paintings and maps. Highlights of the exhibition will include a brilliantly colored 42-foot-long map entitled Ten Thousand Miles Along the Yellow River (late 17th-early 18th century), a rare deerskin map of Forts Zeelandia and Provintia and the City of Tainan (18th century), as well as a striking series of eight photographs.

Bicycle Rider, by contemporary artist Hai Bo (born 1962). Approximately one- third of the works are to be shown for the first time at the Museum, including 16 loans and three new acquisitions.

“Instead of presenting works of art in a strictly chronological progression, the exhibition is organized into a series of discrete themes, so that the visitor will have an opportunity to see the connections between paintings of vastly different dates,” said Maxwell K. Hearn, Curator in the Metropolitan Museum’s Department of Asian Art. “Such comparisons demonstrate how later artists might draw upon earlier pictorial expressions to find their own voice. In Room 3, for example, the theme of Returning to Nature through a Reclusive Life juxtaposes a painting created by Yu Peng (b. 1955) in 1996 with a group of the 14th-century landscapes. By studying them carefully, the viewer can see that Yu Peng clearly found those old masters’ brush idiom and reclusive mindset inspiring,” he continued.

The exhibition opens and closes with a series of photographs, The North: Bicycle Rider, taken by Hai Bo in 2005. Consisting of eight large-format color prints (81 x 51 in. each), they capture different Chinese peasants riding out of the same long straight road. The images are an apt metaphor for contemporary China. Emerging from what was once a predominantly agrarian society, the country’s progress is measured by the effort of countless individuals moving ineluctably along the same path into the future. It is not known where the cyclists are coming from nor where they are heading. They are suspended in transit, completely unaware of the camera trained upon them from some as yet unperceived vantage point on the same road.

Imaginary journeys and escapist visions were often inspired by the political chaos of dynastic change. In the exhibition, a superb 11th-century work by Sima Huai (active ca. 1131-62) will be presented as an example of this theme.

mounted together as a single handscroll, his Two Landscapes Inspired by the Poetry of Du Fu, is a metaphor for reclusion; they reflect the artist’s response to the recent fall of China’s capital to nomadic invaders and the subsequent retreat of the imperial court to the south.

Forts Zeelandia and Provintia and the City of Tainan, a deerskin “map” of the 17th-century Dutch settlement on Taiwan, also makes a curiously fitting parallel to Landscript by Xu Bing (b. 1955), a work inspired in part by the concept of traditional Chinese woodblock-printed painting manuals that function like dictionaries of pictorial motifs. Other contemporary artists featured in the exhibition incorporate older paintings directly into their own works. Two works by Hong Hao (b. 1965), for example, juxtapose photographs of contemporary Beijing with digital scans of a 12th-century cityscape.

The exhibition will also include a photographic album, Bounded by Mountains: Mount Hua, by an American artist, Michael Cherney (b. 1969). By cropping, enlarging, and subdividing a single 35mm view of the mountain into a series of album leaves, Cherney has reshaped the modern medium until it adheres to Chinese principles of format and composition.

An interesting aspect of how Chinese art encourages journeys through time will also be featured in the exhibition. Many scrolls bear extraordinary arrays of early colophons, which allow the viewer to trace the work of art’s journey through the hands of many connoisseurs and collectors. They also offer later viewers a chance to journey back in time to share in the viewing experience of some of China’s most discerning critics and famous artists – Ni Zan (1306-1374) and Dong Qichang (1555-1636), to mention just two.

In conjunction with the exhibition, the Museum will offer gallery talks.

The exhibition is organized by Maxwell K. Hearn. Graphic design is by Emil Micha, Senior Graphic Design Manager, and lighting is by Clint Ross Coller and Richard Lichte, Lighting Designers, all of the Museum’s Design Department. Exhibition location: Galleries for Chinese Paintings and Calligraphy