Combines. His works foreboded pop art, creating a vital shift in the prevailing insular American art climate of the 1950s, while forging links with European surrealism. Rauschenberg redefined American art when he invented the Combine. With these works he exploded the traditional boundary between painting and sculpture, and instead brought the street into the studio. 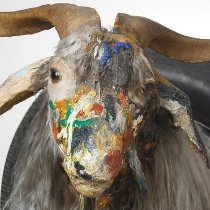 Robert Rauschenberg is regarded to be one of the most significant artists of the late-1900s. His works foreboded pop art, creating a vital shift in the prevailing insular American art climate of the 1950s, while forging links with European surrealism. Now the critically acclaimed exhibition Robert Rauschenberg: Combines comes to Sweden. Moderna Museet’s Monogram (1955-59) obviously has a prominent position among the more than forty works featured in the exhibition.

This is perhaps the most important solo exhibition of this artist’s works ever to be shown. The works are best described as free-standing or wall-mounted objects combining painting and sculpture, produced between 1954 and 1964, a prolific period in Rauschenberg’s long and outstanding oeuvre. Rauschenberg was boundless in his choice of materials, combining newspaper cuttings and photographs, like the cubists, dadaists and surrealists, with objects found on his own rubbish dump – of which Coca-Cola bottles, pinups, rubber tyres and stuffed animals are but a few examples.

It is no exaggeration to say that Rauschenberg redefined American art when he invented the Combine. With these works he exploded the traditional boundary between painting and sculpture, and instead brought the street into the studio. Rauschenberg resumed the dialogue with the outer world that the preceding artist generation, the abstract expressionists, had consistently excluded from their art. The 162 combines he created during a ten-year period also demonstrate his influence on later isms and genres, such as pop art, neo-dada, assemblage, fluxus, Viennese actionism, arte povera and performance art.

Robert Rauschenberg (originally Milton) was born in Port Arthur, Texas, in 1925. After studying pharmacology at the University of Texas he was drafted into the Navy and spent many years caring for mental patients at various Navy hospitals in California. He started painting portraits of his fellow navy recruits that they could send back home to their families. In the late 1940s, he studied at Kansas City Art Institute and at Académie Julian in Paris, where he met the artist Susan Weil, whom he married shortly after. Rauschenberg went on to study at Black Mountain College in North Carolina, where the famous artist and Bauhaus teacher Joseph Albers was on the staff. It was at Black Mountain that Rauschenberg forged his seminal friendship with the avant-garde choreographer and dancer Merce Cunningham and the legendary composers John Cage and David Tudor. It was there, also, that he participated in Cage’s Theater Piece #1 which is now considered to be the world’s first happening. Robert Rauschenberg currently lives in Captiva in Florida.

Text from the catalogue Robert Rauschenberg: Combines
The artist Robert Rauschenberg’s relations with Moderna Museet date back to 1961 and the legendary exhibition Movement in Art. Pontus Hultén (1924-2006) had been appointed director of Moderna Museet in 1960, two years after the museum opened. Hultén had seen Rauschenberg’s work in Paris. Movement in Art was the result of many years of work and collaboration with Willem Sandberg at the Stedelijk Museum in Amsterdam, where the exhibition was shown under the title Bewogen Beweging.

Rauschenberg created a new work especially for Movement in Art.The work, which he called Black Market, was commissioned by Billy Klüver (1927-2004), an engineer living in New York, an old friend of Hultén who had many friends in the American art scene. Black Market consists of a painting attached to a suitcase lying on the floor. The suitcase originally contained four rubber stamps and an inkpad. Black Market also featured in the Dream Museum exhibition in 1964 but was not included among the many works that were purchased for the collection with the SEK 5 million government grant at the time.

Rauschenberg came to Stockholm to install Black Market and offered to help install other works in the exhibition. During his time in Stockholm he also created another painting that was hung next to Black Market. According to an anecdote, Rauschenberg was walking next to a young woman at the opening who, on passing Rauschenberg’s work, commented that Ingemar Johansson (the boxing champion) could just as well have painted it. Consequently, Rauschenberg went up to his painting and wrote on it with a pen “This is Johanson’s Painting”, and that is the title of the painting to this day.

The following year, in 1962, Moderna Museet featured the exhibition 4 Americans: Jasper Johns, Alfred Leslie, Robert Rauschenberg, Richard Stankiewicz. This is also one of the more famous, debated and well-visited exhibitions in the museums first years. Pontus Hultén noted in the introduction to the catalogue that the greatest adventures in visual arts after the Second World War had taken place in America, and that Rauschenberg was the most renowned artist of his generation. There are even other similarities between the introduction dated 1962 and the postscript he wrote for the current catalogue. At the 1962 exhibition Rauschenberg presented 17 combines and two drawings. These included Charlene (1954), Odalisque (1955–58) and Pilgrim (1960). All these are now back at Moderna Museet. This was also the first time Monogram (1955–59) was here, and “The Goat” definitely stole the limelight in the reviews.

Two years later, in 1964, the museum and Fylkingen jointly organised five New York evenings with ballet, concerts and happenings. Stockholm was visited by the Merce Cunningham Dance Company with John Cage, David Tudor, Yvonne Rainer, Robert Morris and Robert Rauschenberg. Rauschenberg accompanied Cunningham’s company on a world tour, designing costumes, lighting and stage sets. At the time, he developed an interest in performance and created a new programme for his New York evening on 13 September, the now famous Elgin Tie. The artist slid down a rope from the museum ceiling and landed in a barrel of water, after which he followed a real cow out of the gallery. This performance was only carried out once.

In 1965 Robert Rauschenberg was again featured at Moderna Museet, with his illustrations for Dante’s Divine Comedy (The Inferno), presenting his interpretation of the literary work and also demonstrated his fascination for trying out new techniques and materials. Monogram was shown for the first time after its purchase in 1964, along with the drawings. Since then, it has featured in the museums permanent collection exhibitions and has been seen by generations of visitors to the museum. Rauschenberg returned to the museum again in 1973 to participate in The New York Collection exhibition. This project, which had been launched in 1971, was another collaboration between Klüver and Hultén. The idea was to gather a group of key works by artists who were active in New York in the 1960s. Together with several artists, Klüver had built up the organisation Experiments in Art and Technology (E.A.T.) during that period, with the purpose of combining art and technology. Together, they managed to get funding from the Ministry of Education to acquire some 30 works of art for the Moderna Museet collection, including Rauschenberg’s Mud Muse (1968–71).