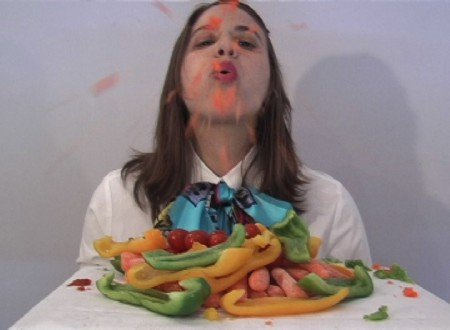 In the 50's, there was only one meaning for the “F” word and that was the slang word for copulation; coincidentally, the act of love that begets the life that begins in a female womb. In the last decade, the “F” word has been used derogatively to refer to words like “feminist” and “fascist,” even “flag” was draped in controversy. How will we refer to this decade? Is this the art of the 00”s? Does it have gender? “G” follows “F” in the English alphabet. Why do English nouns not have gender like the Romance and Germanic languages? Who decided the gender of their nouns?

“Say Something,” a painting of Dana Frankfort implores. Suzanne McClelland mockingly replies in Coming to a Head on how to give a blow job in pink and red. Ghada Amer and Reza Farkhondeh ever so subtly suggest females making love in Dalliances. Embroidery and fabric are everywhere, materials long associated with the female. Digital embroidery, right or left brain? Who is right? Who is left? Where is feeling? What represents fact? Jennifer Viola uses an alphabet of sign language to express more than the letter “F.” Sabyna Sterrett in Flood, hand stitches pearls on fabric printed with fish (a Christian symbol of faith) to memorialize the devastating Easter flood in 1979 of the Pearl River that flows through Mississippi, the same river that was dragged for bodies during civil rights trials in the 60's.

This exhibition is dedicated to the memory of Arlene Raven.

Image: "The Hand that Feeds You" by Kate Gilmore, courtesy of Pierogi Gallery.