Code Unknown. Her paintings, infused with unsettling bold hues, weave in and out of abstraction and representation. Drawing heavily from new-wave films, Dufresne creates portraits where the central character is idolized in their most self-aware and vulnerable state. 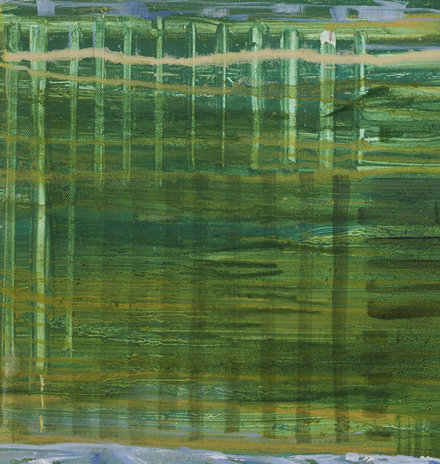 Monya Rowe Gallery is very pleased to announce a solo exhibition by Angela Dufresne titled Code Unknown. This is the artists’ second solo show at the gallery.

Angela Dufresne’s paintings, infused with unsettling bold hues, weave in and out of abstraction and representation. Ostensibly of another time, each unabashedly romanticized scene is often infused with facets of architecture or film. Drawing heavily from new-wave films, Dufresne creates portraits, usually of women (Gena Rowlands, Hanna Schygulla for instance), where the central character is idolized in their most self-aware and vulnerable state. Frequently void of a distinct narrative, but rather portraying a mood and ambiance through a reflective moment, each subject is rendered in Dufresne’s idiosyncratic vigorous painting approach.

The portraits and interiors act as small moments or glimpses inside the modernist structures depicted in Dufresne’s landscape scenes. Peculiar modernist buildings that may only partially exist - the artist has taken the liberty to add what she feels should exist – are placed among ostentatious mountainous backgrounds. The buildings depicted are the center of attention in these seemingly abandoned landscapes. Dufresne further personalizes her subjects by robustly dismantling and adding irrational elements to the buildings or placing her heroines in locations among or as friends and lovers.

Dufresne’s atmospheric paintings conjure up a whirlpool of time, history, film and architecture amidst moody temperaments that intermittently relies merely on pure paint itself. Aiming to juxtapose complexity with simple forms of color and abstraction, the works meander through moments of pure nuance to grand ideologies.