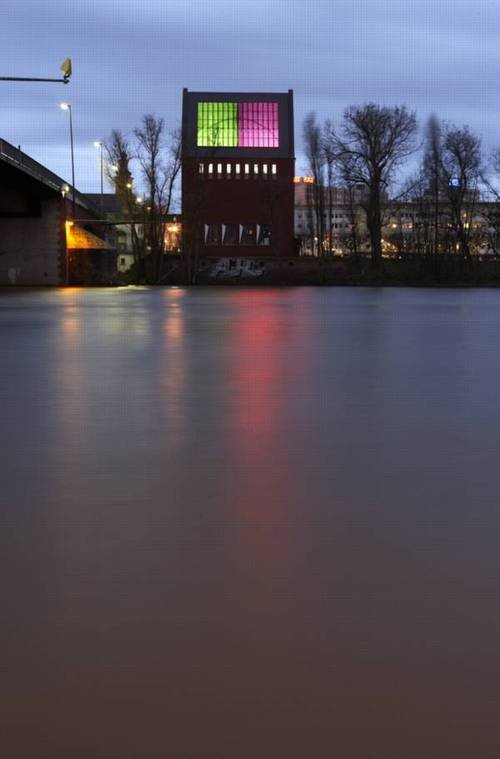 Olafur Eliasson's (born in 1967 in Copenhagen) project "light lab", extending over two years, consists of 12 different installations. Even before the actual move of Portikus into its new domicile, Eliasson presented the first work of the series - an arc of orange light ("light lab, test 1") in April 2006 - one month before the first exhibition was opened on May 5th displaying works of Marjetica Potrc and Tomas Saraceno. However, the work itself is invisible from the inside of the building - it is only after dawn and through the northern side of the roof, which is fully glazed, that it can be viewed. Currently, Eliasson is presenting "light lab, test 7", a two field installation with varying colours. The installation refers to the switching of the traffic light in its complimentary colours.

This work is rather a form of interaction with the architectural conditions of the new exhibition hall, which is utterly exposed floating over the river, than a singular piece of art. Eliasson reclaims the completely glazed truss in order to render it transparent and present at the same time.

The project is supported by Siteco.

The participating certificate was initiated on the occasion of the 100th Portikus exhibition. One hundred artists who had been exhibiting at Portikus since 1987 were asked each to design 10 of those participating certificates. Each certificate was numbered between 1 and 1000, and the idea was, that they were sold by order following those numbers. This meant that one person could order a certificate for € 500,-, but without having an idea who the artist was. It was by complete chance whether you would receive a print by Sigmar Polke, a drawing by Lawrence Weiner or Ellsworth Kelly, a photo by Candida Höfer or Andreas Gursky, a work by Gerhard Richter, Marlene Dumas, Thomas Hirschhorn, Ayse Erkmen, Sol LeWitt, Hanne Darboven etc. During the project we sold about 650 of those participating certificates.

Now, we have been discussing about how to proceed with the other 350 works. We decided to arrange the certificates in twenty carefully curated sets of ten. Each of those sets is sold for € 5.000,-, but the collectors know what they receive.
Images of available sets
http://www.portikus.de/participating_certificates.html

In the past the participating certificates were shown at Portikus in March 2001 and at the art frankfurt in the same year.