Infinite Anomaly: Tahlequah. He has created a body of paintings, sculptures, and a new installation from an history full of anguish, loss, hope, about the relationship of Native Indian people and their land. 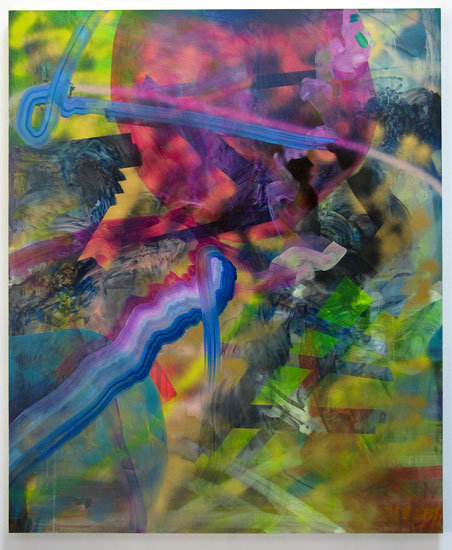 In 2005, artist Jeffrey Gibson began researching a small plot of land in Tahlequah, Oklahoma, that he would one day inherit from his mother. In 1906 the land was given to his family as part of the Federal Indian Allotment Act. “Giving” the land to individual Indians was an acculturation act. It was meant to break apart the collective voice of the tribes into individual landowners who, due to poverty, would most likely sell the land back and therefore become a part of the national economy. Jeffrey has created a body of paintings, sculptures, and a new installation from this history full of anguish, loss, hope, and the natural beauty of the land.

“The relationship of Native people to place, historically and metaphysically, is well documented by scholars and expressed at length in the visual and literary arts. Indeed, this relationship to “the land” is often cited as the very root of our indigeneity. Geography has shaped and defined Native cultures, literally and conceptually, over countless generations. Our origin stories and understanding of the universe often relate to geographical features in the landscape, and the material culture of each community is based on the natural environment of our homelands. For more than 500 years, land has also been a site and source of conflict and struggle with outsiders—be they non-Indian settlers seeking farmland, or commercial enterprises eager to exploit natural resources. As a subject for Native artists, then, the land/landscape is laden with history and expectation. Land is home, culture, and identity, but it also represents violence, isolation, and loss.”
– Kathleen Ash-Milby

Selected works from this project were included in No Reservations at The Aldrich Museum of Contemporary Art, and recent works will be included in Off The Map at The National Museum of The American Indian, Smithsonian Institution. This project was made possible by funding from The Creative Capital Foundation. A publication including an essay by Hélène Cixous about The Infinite Anomaly: Tahlequah, Oklahoma Project will be published to accompany the debut of the works included in Off The Map. A catalog will also be available to accompany the exhibition including essays by Kathleen Ash-Milby, Kate Morris, and Paul Chaat Smith.