Banner's project 'The Bastard Word', by Fiona Banner, focuses on recent work taking the form of large and small sculptures, installations, films and drawings. 'Ritual' a video work by Israeli artist Yael Bartana addresses her relationship to her homeland and the complex interaction between the individual and society. 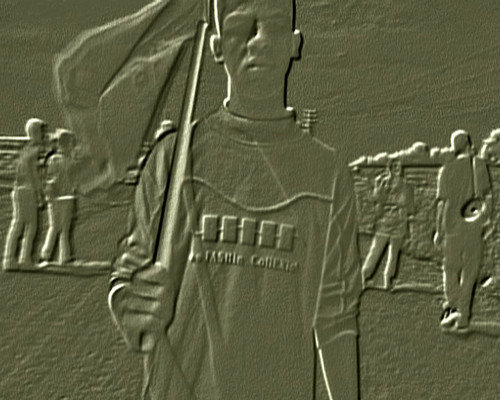 Fiona Banner is a leading mid-career artist and sculptor from London and a former nominee for the Turner Prize. Banner’s project and exhibition at The Power Plant, The Bastard Word, focuses on recent work taking the form of large and small sculptures, installations, films and drawings. Much of this work is being made for The Power Plant and represents some of the most adventurous work of her career.

The exhibition is being curated by Gregory Burke, Director of The Power Plant, who states: “This exhibition is one of the most ambitious yet staged by Banner and the exhibition is consistent with our aims of presenting work by leading international artists in depth and of facilitating the production of new work.”

The Bastard Word features Parade, a collection of models of all the world’s fighter planes, a new work that consists of a frieze of the alphabet hand modeled in neon by Banner, a set of alphabet drawings formed out of the parts of war planes. Banner will exhibit two films and also produce a number of site specific wall drawings for the exhibition, further works in her Nude series.

A centerpiece of the show will be a work executed on the main wing of a Tornado fighter jet, Banner’s largest sculpture to date, which stands on its end at a monumental 18 feet high.

Another major feature of the exhibition is a LIVE performance by Banner, where the artist will produce a new work in the Nude series live before an audience. The resulting work will be both documented as a performance and shown as a drawing in the exhibition.

The Power Plant will also collaborate with Banner to produce an accessible publication documenting the exhibition. This publication will feature many images and essays by curator Gregory Burke and Cay-Sophie Rabinowitz, a leading American art writer and the US Editor of renowned art magazine Parkett. The intention is to make the publication available to as wide an audience as possible.

“I commend these supporters who have enabled us to transport very substantial sculptural works to Canada and provide this rare opportunity for our audiences,” said Burke.

Also opening March 3, 2007, is Ritual, featuring films by Amsterdam-based Israeli artist Yael Bartana. Capturing the friction between public and private, the four short films in this exhibition share questions about the military’s pervasive presence, group behaviour amidst political uncertainly, and the conquest, settlement and defence of the land.

The film and video work of Israeli artist Yael Bartana addresses her relationship to her homeland and the complex interaction between the individual and society. Bartana is interested in how individuals behave within a collective and how they can exist within a belief system without compromising their own. Adopting the role of observer or ethnographer, the artist investigates the militarization and socio-political dynamics of her home country in her quest to document Israel’s national and cultural identity especially as reflected in its rituals and representations. According to the artist, “Personal, intimate reactions have the potential to provoke honest responses and perhaps replace the predictable, controlled reactions encouraged by the state.” While the themes in her work often relates to the Israeli context, they also have universal importance.

Fiona Banner: The Bastard Word and Yael Bartana: Ritual will open with an Opening Reception held at The Power Plant, Harbourfront Centre, 231 Queens Quay West, on Friday, 2 March, from 7 to 11 p.m. Admission to the reception is free and open to the public.

The Power Plant would like to thank media partner NOW Magazine.