A view of 20th-century art 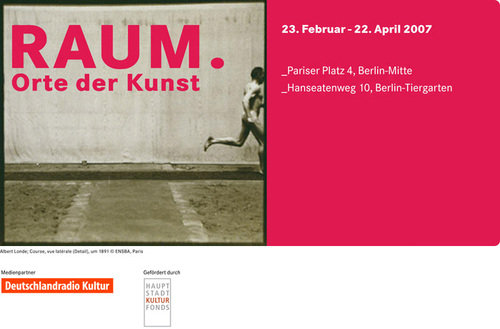 The Academy of Arts opened the exhibition “SPACE. Sites for Art” on February 23, 2007. It is the conclusion of an interdisciplinary project that has run for three years. The project began with the “prologue” to the opening of the new building on Pariser Platz and continued with an international symposium and a whole series of events. The central theme of the exhibition is the question of the relationship between space and site in the arts of the 20th and beginning 21st centuries. This takes up, on the one hand, an artistic problem and, on the other, also the answer of the arts to a global change in our society. Art has become site-less – and not just since the emergence of virtual media. Already since the beginning of the 20th century, the arts increasingly connect depictions of space with an examination of their own site. With the disappearance of the unquestioned hierarchy of societal sites in modernism, art lost not only its commission to represent, but also the foundation of its traditional understanding of itself.

“SPACE. Sites for Art” is a first attempt to reveal and discuss this situation in the current horizon of the arts and in their interdisciplinary philosophical and motific dimensions.

In both of the Academy’s buildings, the exhibition investigates this phenomenon and describes an arc from classical modernism to the present. A view of 20th-century art is opened up that traces the increasingly complex ideas of space.

The mobility of modern societies ultimately led to the dissolution of traditional site determinations. Art’s answer is an enormous differentiation among concepts of and reflections on space and spatiality. This process is as artistically and intellectually significant as the discovery of perspective in the Renaissance.

On Hanseatenweg, the divergence between visual art designs will be made visible using the examples of classical modernist positions of the 20th century. Works by Giacometti, Picasso, Ernst, Matisse, Bonnard, Klee, Morandi, and others bear witness to the field of tension between the intimacy of creative freedom and its pictorial objectification. They will be flanked on the one hand by early photographs by Albert Londe, Man Ray, Medardo Rosso, and Brancusi, which make clear the new form of perceiving space, which also involves new scientific knowledge. On the other hand, works by Gordon Matta-Clark establish a relationship to contemporary art’s deconstructive ideas of space.

The halls on Pariser Platz are reserved for significant examples of artistic dealings with “real” space. Here the installation of the “Wall Pieces” from Piet Mondrian’s last New York studio remind us of the origin of the project, which started with the picture reality of intervening in people’s living space with artistic strategies. Works by Bridget Riley, Fred Sandback, Santiago Sierra, and others stand for the extremely dissimilar developments that have grown from this approach since the 1960s. Works by Demand and Sugimoto and contributions by Trisha Brown and Gary Hill, who present the performative approach to space, will supplement this presentation.

The exhibition invites viewers to conceive the field of reference of contemporary art more broadly and to see it more openly.

It will be accompanied by a program of events. From April 19 to 21, 2007, an international symposium will be held on the work of Gordon Matta-Clark, which takes a central position in the exhibition.