Feminist Art Revisited 1960-1980. Converging and simultaneous interests in role play, masquerade, and fragmentation unite the 19 female international artists in the exhibition. Shifting and constructed identities are explored in the show through the subversive interpretation of traditional female roles. A brochure featuring an original essay by Abigail Solomon-Godeau will be available. 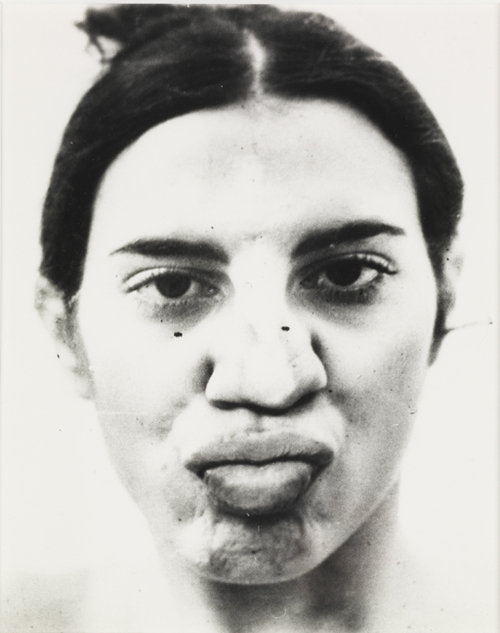 Converging and simultaneous interests in role play, masquerade, and fragmentation unite the 19 female artists in Role Play: Feminist Art Revisited 1960-1980. The exhibition will open to the public on Thursday, March 15, and continue through April 28. A brochure featuring an original essay by Abigail Solomon-Godeau will be available at the exhibition.

Shifting and constructed identities are explored in the exhibition through the subversive interpretation of traditional female roles. Helen Chadwick, Birgit Jürgenssen and Martha Rosler play with images of women in the domestic sphere, while Eleanor Antin and Adrian Piper each develop a persona that actualizes a stereotypical concept of women. Two artists in the exhibition respond to “The Bride Stripped Bare by Her Bachelors, Even,” the iconic work by Marcel Duchamp that features an ambiguous, oft-debated depiction of a female figure.

The sexualization of women and their bodies, and the desire to reclaim their bodies for themselves, are key elements to the exhibition. Marina Abramovic, Lynda Benglis, Valie Export, Yoko Ono and Hannah Wilke propose differing interpretations of female beauty and power. Fragmentation and disappearance figure prominently, most evidently in photographic work by Helena Almeida, Ana Mendieta, Carolee Schneemann and Francesca Woodman. A reliance on photography and film, both transitory mediums, emphasize the sense of identity as a socially fluid and fugitive state.

One of the criticisms of feminism has been that it fails to integrate women of color and women from outside Europe and North America. Role Play highlights women from diverse backgrounds whose work deserves to be more fully assimilated in the existing narrative of contemporary art history, such as Anna Bella Geiger, Anna Maria Maiolino, Senga Nengudi, Lorraine O'Grady and Shigeko Kubota.

Though feminism is one of the important social and cultural movements of the 20th century, its influence on art making has not been examined thoroughly until recently. This spring, two exhibitions—WACK! Art and the Feminist Revolution, organized by Connie Butler for the Museum of Contemporary Art, Los Angeles; and Global Feminisms, organized by Linda Nochlin and Maura Reilly for the Brooklyn Museum—will contrast seminal feminist artists of the last 40 years and their influence on younger female artists, many of whom do not identify with the term. Role Play: Feminist Art Revisited 1960-1980 aims to contribute to this current dialogue with a thematic selection of artists.

Gallery Hours: Tuesday to Saturday, 10 am to 6 pm