Asparagus: A Horticultural Ballet is an exhibition and live performance collaboration with the Montreal-based band Les Georges Leningrad, inspired by rumour and myth. 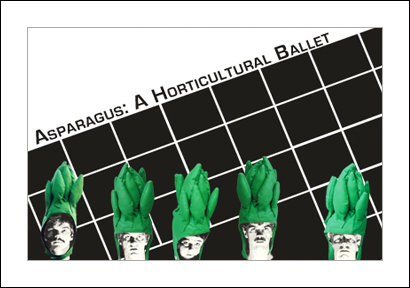 The Showroom is currently working with Pil and Galia Kollectiv on their project Asparagus: A Horticultural Ballet, an exhibition and off-site performance collaboration with the Montreal-based band Les Georges Leningrad.

Asparagus: A Horticultural Ballet is a live performance piece inspired by rumour and myth. In the late 1970s, while still a student, Waw Pierogi, later of an obscure New Jersey minimal synth band Xex, composed the interdisciplinary Asparagus: A Horticultural Ballet. No documentation of the piece exists, but Pil and Galia Kollectiv have become fascinated by this work, alongside another lost work, Oskar Schlemmer's Triadic Ballet. Pil and Galia Kollectivs' desire is not to recreate either, but rather they are intrigued by the possibilities of making a new work through the collision of ideas left behind by former art movements and other cultural phenomena. For them unrealised, forgotten and failed revolutions are as much a legacy of modernism as the utopian belief in progress that we have inherited.