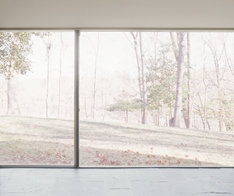 Italian photographer Luisa Lambri trains her camera on a local home designed by influential modernist Marcel Breuer. The latest in a series of installations in The Baltimore Museum of Art’s new experimental project space, this exhibition features approximately 15 laserchrome color prints that reveal subtle changes in environment over the course of a day in Hooper House II, a Bauhaus-style home built in a wooded sanctuary on the edge of Baltimore City in the 1950s.

Best known for her subtle images of architectural landmarks, Lambri uses sequential photographs to investigate the relationship between subjective experience and architectural space, noting the gradual shifts in light and atmosphere that change the mood of a place. Windows and doors become symbolic avenues of visual escape, where the uninhabited interior space gives way to the surrounding vista of trees and meadows. Each work builds upon the last, allowing for a calm and extended gaze that is both visually captivating and quietly mysterious.

Eight internationally renowned artists acclaimed for their work in contemporary photography come to the BMA in March and April to discuss the top issues in photography today. Moderated by the influential art critic and JHU Professor Michael Fried and BMA Senior Curator of Contemporary Art Darsie Alexander, this innovative program examines topics that range from the relationship of photography to painting to the impact of digital technology. Several of the participating artists are represented in the BMA’s collection of more than 3,000 photographs, and have been featured in recent exhibitions at the Museum.

Jeff Wall has exhibited internationally for 25 years and is widely considered to be one of the most influential and intriguing artists working today. He is best known for his light boxes, large-scale color transparencies that combine the seductive glow of a cinema screen with the physical presence of sculpture. A writer and historian, he imparts an intellectual rigor to work placed at the center of the most current art theory and debate.

Stephen Shore achieved recognition as a key figure in bringing serious consideration to color photography during the 1970s. During this period, he traveled across the U.S. documenting the street corners, diners, and motels of ordinary America. His indelible images have shaped conceptions of American popular culture while contributing to the fundamental themes of photography of today.

German artist Thomas Demand’s meticulously crafted images take their cues from historical sites and events, lending a strange familiarity to these otherwise artificial scenes. With representation in major museums across the globe, he is most recently the subject of a one-person exhibition at the Museum of Modern Art, New York.

Since the 1970s, James Welling has focused his attention on the perceptual and material aspects of the photograph, treating each new image as an experiment. His visually spare compositions challenge customary photographic subject matter by exposing the process itself as content. A professor of art at UCLA, he is the recipient of many distinguished awards and is represented in collections around the world. His work was featured in a major BMA exhibition in 2000.

From his early black-and-white streetscapes to his recent mural-sized color views of primeval landscapes around the world, Thomas Struth has been a key figure in bringing photography into the mainstream of contemporary art. His most celebrated works belong to the Museum series, monumental color images of people visiting churches, museums, and other cultural destinations.

Photographer Mitch Epstein is an inveterate traveler, searching out sites that combine visual intrigue and psychological power. Widely published and exhibited, his work follows in the tradition of great street photographers, who find deeper meaning in seemingly random details of everyday life. More recent work has added a personal narrative to his ever-evolving oeuvre.

Experimental filmmaker Anthony McCall's dramatic 'solid light' projections transformed the possibilities of cinema in the 1970s, changing the viewer's experience from that of static bystander to active participant in the physical reality of film. A writer and historian whose career has spanned the analog-to-digital revolution, McCall is among the most noted and articulate speakers on the role of media today.

British artist Tacita Dean examines the detritus and residue of photographic history as it leaves its marks on old images, postcards, and books. Using found and often frayed sources, she creates new work that examines the relationship between the past and present. Dean was recently awarded the Hugo Boss Prize from the Guggenheim Museum in New York, where her work will be on view from February 23–June 6, 2007. A resident of Berlin, she is also a highly regarded experimental filmmaker.

Moderator Michael Fried, currently the James R. Herbert Boone Professor of Humanities at The Johns Hopkins University, is a prominent art critic, historian, poet, and a scholar of broad interests and expertise. In the 1960s he was involved in a circle of art critics that included Clement Greenberg and published a critique of Minimalism considered one of the most important essays on 20th-century American art. Fried is also the author of books about 18th- and 19th-century painting and literature, a collection of criticism of contemporary art, and several volumes of poetry. In 2004, he received a Mellon Distinguished Achievement Award. He is currently working on a book dedicated to contemporary photography.

Moderator Darsie Alexander, Senior Curator of Contemporary Art at The Baltimore Museum of Art, specializes in contemporary photography. Her work includes writing on posed photographs, representations of the body, and the role of documentation photographs in 1970s performance art. At the BMA she organized SlideShow (2005), the first major exhibition to focus on the evolution of slides, Common/Places: Contemporary Photography from Germany and Northern Europe (2002), and Parallel Tracks: The History of Photography in Two Brief Installments (2002). Prior to joining the BMA, she was Assistant Curator in the Department of Photography at The Museum of Modern Art, New York, where she organized numerous other exhibitions.