An (invisible) Archive. This group exhibition takes absence as it starting point and analises the idea of emptiness, void, nothingness, through the work of several international artists, such as Stefania Galegati, Jonathan Monk, Dora Garcia, David Lamelas, etc. Curated by Filipa Ramos. 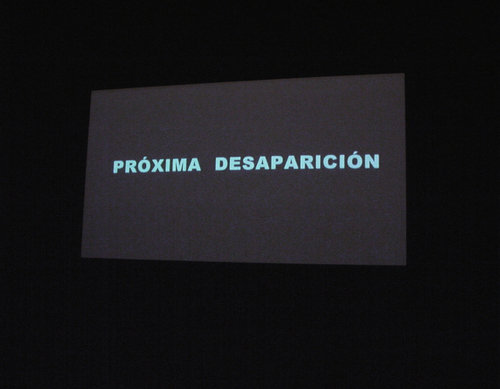 Absence
Clearly Invisible, which will be presented at Consulta in Centre d’Art Santa Monica, takes absence as it starting point.
The exhibition is about the production of an archive that doesn’t exist, for most of its contents are invisible, inexistent or they have took failure as their inspiration. It intends to be a reflection about how emptiness, void and incompleteness have an infinite potential in artistic creation.
Therefore, Clearly Invisible is the most extended visual possibility of seeing something that can’t or shouldn’t be seen. Both Mario Garcia Torres’ (Monclova, Mexico, 1975) A Never-to-be-seen-by-the-patron Artwork (2004) and Alexandre Estrela’s (Lisbon, 1971) The Dark Stands Still (2000) explore impossibility of seeing in a different approach. Garcia Torres creates an artwork that should never be seen by its patron, or it will loose its authenticity, perverting the usual fruition of the work, especially by the person who got it. On the other side, Estrela hinders a camcorder from capturing images, perverting its use and function and reducing it to a mere object that, standing vertically on its lense and being captured by another video camera, functions as an almost useless action.

Emptiness
Clearly Invisible analyses how absence can be a productive subject (and object) in the artistic process and how the lack of something can interfere in the way in which a work of art is perceived. It is not an exhibition about invisibility in itself but a reflection about the results produced by the lack of visibility. This “condition of absence” is an extremely productive concept and can generate an enormous freedom from the weight of the visual in art.
David Lamelas’ (Buenos Aires, 1946) installation view of the Límite de una proyección I (as showed in Instituto Torcuato Di Tella, Buenos Aires, 1967) is the perfect example of a work that transforms space and its perception through the presence of absence: there is nothing there but light. However, this luminous presence has an extremely powerful presence that becomes an essence in itself, disturbing our ideas of sculpture, space and image.
Dora Garcia’s (Valladolid, 1965) Locked Room is an ongoing project that explores this narrow line between invisibility and emptiness. By creating a locked room where nobody but her can enter, the Spanish artist subtracts an area from the museum that becomes a mental space, for it is impossible to have access to it outside imagination. All the physical relations with it are totally broken and that space remains forever unreachable and unseen, even if still perceived. (Grenoble, 1975) has produced a series of works in which she reflects about both her condition as an artist and about her own presence inside spaces. The t-shirt she exhibits is a documentation of a performance she organized in Artissima Artfair, Turin, 2006, where there were people walking around the art fair with her name on it. The artist wasn’t present, which accentuated the idea of disappearance and non-correspondence between a text, a name and a person, this is connected to another of her works, I’m Looking for Myself, a series of public adds she displayed in the street, trying to find someone who could be similar (in different ways) to her.

Void
Clearly Invisible is a research-oriented project that has a very strong documental weight, therefore most of the works exhibited, together with the books, texts and other materials, are part of the same concept of creating a selective and subjective archive that intends to research invisibility as an artistic practice. The project, baring in mind its intention to produce an archive, will give priority to all the processes behind the creation of artwork, in a sense, to the pre-production of invisibility. Davide Minuti (Turin, 1973) is showing In Between (you and me sometimes) (2007), in which he uses unsent letters and messages to establish impossible strategies of communication that oscillate between his memories and our thoughts, passing from past to future through the present conditions in which they are exposed to public knowledge. This work is part of a bigger installation from which everything was removed and all that is left to be seen is the immateriality of his own words.
Jonathan Monk (Leicester, 1969) reflects about reproduction and loss in his Today is Just a Copy of Yesterday (Lisson/LeWitt) (2003). An image of an art handler installing a wall-piece by Sol LeWitt at London’s Lisson Gallery for their 1972 exhibition has been used to create a series of 80 slides of increasingly poor quality, doping each one of them from the precedent until the image is totally lost an unrecognizable.
Ignasi Aballi’s (Barcelona, 1958) video Próxima Apariciòn (2005) explores anticipation and suspension while referring to cinema culture to endlessly announce something that never gets to happen. Also his documentation of Desapariciones (2002), 24 posters of films that the French filmmaker Georges Perec never made, move in an gap that the artist managed to create through the visual announces of something it will never happen; fiction, really and expectation get confused in an impossible promise.

Nothingness
Invisibility, nothing and non-existent are not one and the same, the invisible is not something that doesn’t exist and nothing can exist as so. Instead, they can be seen as categories or states of something that cannot be seen but has a presence that manifests itself in a different way from the epiphany of the visual. Some of the artists reflect, inquire and demand about a series of contingent desires that surround these concepts. Stefan Brüggemann (Mexico City, 1975) presents The reflection of Nothing (2006), a video that reflects on the condition of productivity and un-productivity, as well as the meaning of such concepts as doing nothing. There is an odd bi-polarity between what is seen and what is listened to and the work is definitely the most visual presence in the show.
Wolfgang Berkowski’s (Salzkotten, 1960) Berkowski distributes Drawings among workers (1994-2007) explores the emptiness of the endless possibilities of connection between image and text, because we never get to know what is real and fictional in the situation described and shown. Stefania Galegati (Ravenna, 1971) and Marco Raparelli (Rome, 1975) present their artist’s book AS a drop of water on a k-way (2007), a diary of the expectations and projects of two curators, Scintilla Robina and Norberto Dalmata who deal with all the frustrations and misunderstandings that happen inside the art system while trying to organize their first exhibition.

Invisibility, absence and nothingness are concepts that extend the limits of artistic creation to an endless array of possibilities, giving space and freedom to imagination, and that is what this exhibition is all about: developing an archive of unruled and uncontrolled possibilities of perceiving art and exhibitions. In this context, there’s nothing better than quoting Mel Bochner’s words:

The root word “image” need not to be used only to mean representation (in the sense of one thing referring to something other than itsef). To re-present can be defined as the shift in referential frames of the viewer from the space of events to the space of statements or vice-versa. Imagining (as opposed to imaging) is not a pictorial preoccupation. Imagination is a projection, the exteriorizing of ideas about the nature of things seen. It re-produces that which is initially without product.
Mel Bochner, 1970