Solo show. The film and an assemblage of advertorials, computer print-outs, photocopies and colour photographs, take an artistic look at individual approaches to a global problem and its representation in the media. 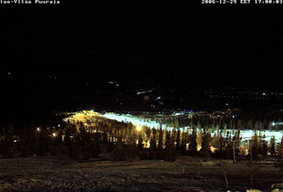 One spin-off of climate change is the advent of numerous "ski resorts" across Europe, where artificial slopes are created and marketed to tourists. The Finnish artist Laura Horelli presents her recent video film in Galerie Barbara Weiss. This film and an assemblage of advertorials, computer print-outs, photocopies and colour photographs, take an artistic look at individual approaches to a global problem and its representation in the media.

Researched material, quotations, and the projection of her own subjective experience onto the fictional person of a young artist are the means employed by Laura Horelli to investigate conventional patterns of reception. The film's main protagonist has taken an interest in artificial ski slopes and snow canons and wishes to make a video on the subject, and now finds herself confronted with the news and messages of the mass media and advertising. Even marginal events soon begin to influence her perception and therefore also her artistic project.

The viewer follows the artist in the film in her conceptual and experimental investigation of the subject. She gathers information about ski projects in northern Finland, China and Germany, information on project planning and on projects failing. The emphasis is on the research, but in contrast to a report, the method is associative. The protagonist takes a look at historical, economic and social aspects, but repeatedly finds herself talking about herself, letting the viewer gain insight into very personal experience from her private life -- details on the idea behind the project, doubts about its implementation or questions as to how to deal with her own viewpoint, which is in fact immanent to the system.

Two further perspectives are provided from specific locations as voices off, using various languages (English, German, Finnish) and serving as sources of information for both the viewer of the film and the actress seen by the viewer. This quickly leads to questions as to identity and the nature of the first-person focus of the film. The investigations undertaken by all the figures in the film remain open-ended, as does the work itself.

The method Laura Horelli uses is situated between the semi-documentary and the genre of the "author's film". Horelli is not interested in representing, creating or suggesting objectivity. She operates in the realm of the private and personal and at the same time lays bare the effects of the influence of the media. To do this, she incorporates everyday experience in her video by means of theatrical scenes, while also assembling the pictorial collage of found text and image fragments that assert themselves as the relics of perception.

Laura Horelli's installation goes far beyond the level of media criticism. With its frequent use of profound humour, the work plays with the different perspectives of artist and viewer, and with what the two perceive differently and what unites them in collective perception.