Displacement, compassion and humour in recent art from Britain. The artists in the exhibition combine strategies such as displacement, decontextualisation and repetition, inherited from Conceptual Art and used in an uncharacteristic manner, with humour and defiance of viewers' expectations. 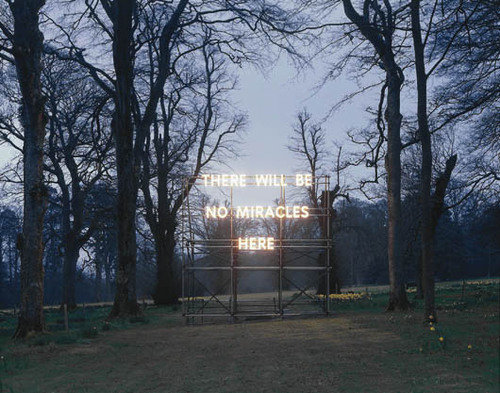 Displacement, compassion and humour in recent art from Britain

Breaking Step / U raskoraku brings together new work by fifteen major figures of the British art scene. The exhibition is the culmination of a four-year collaboration between the British Council and the Museum of Contemporary Art in Belgrade. Breaking Step / U raskoraku is neither a survey nor an attempt to construct a historical narrative, but rather a critical consideration of some of the most pronounced tendencies in contemporary British art.

In recent years, one such tendency has been an effort to break away from ideas and interests prevalent in the early to mid 90s, with which contemporary British art is still widely identified. In relation to the art system and its institutional structures, artists today seem to occupy an uncertain position, participating in the process of distribution and promotion, yet constantly problematising and renegotiating their own role within it.

The artists in the exhibition demonstrate an involvement with a broader range of interests and a personal and dynamic engagement with a wider social reality, as well as with new collaborative and participatory models and alternative artistic interventions. An important aspect of Breaking Step / U raskoraku is the inclusion of a series of new projects commissioned in response to the specific local situation in Belgrade.

While they work within traditional representational modes, in a general sense, the artists in Breaking Step / U raskoraku consistently seek to undermine the ideological function of these modes. To this end, they employ a number of strategies – displacement, re–enactment, decontextualisation, repetition or an amalgamation of disparate references and media – inherited from Conceptual Art, but often used in an uncharacteristic manner. It is this close connection with the politics, ethics and aesthetics of Conceptualism that forms one of the strong thematic threads running through the exhibition.

Another unifying factor is the selected artists’ use of humour in their work. Whether pointed and unswerving or subtle and understated, it is of a kind far removed from the postmodern irony of the 90s. It is a humour with sympathy, evincing a capacity simultaneously to show affection for something and to think critically about it; a form of playful teasing by those close to, and concerned for, the target of their wit.

Most importantly, what connects all the practices in Breaking Step / U raskoraku is their systematic defiance of our expectations, evading attempts at an easy classification. In other words, works selected for this exhibition share the sense of being at odds with whichever framework we might apply to interpret them: they are site–specific while questioning the idea of site–specificity, marketable but not market–driven, compassionate but not sentimental, and intimate yet far from comforting.

Organised by the British Council and the Museum of Contemporary Art, Belgrade.