Sinsel presents new works made of a range of materials. Mostly wall-based, the pieces rely on the conventions of viewing panel paintings but also act as found objects that we encounter rather than read into. 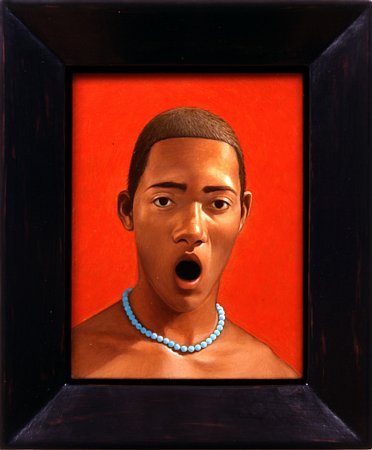 For his second solo show at the gallery, London-based artist Daniel Sinsel presents new works made of a range of materials. Mostly wall-based, the pieces rely on the conventions of viewing panel paintings but also act as found objects that we encounter rather than read into. His work evokes the traditions of the German Bauhaus of the 1920s and 30s whilst maintaining a distinct balance between visual function and décor. Sinsel’s work remains independent of any existing design or architectural industry, but rather serves and provides the enclosed system and personal language of Sinsel's own vision. Pastry and chocolate have been recreated in durable matter like linen, wax, pigment or concrete, but have the gleam of a precious artifact.

The handcrafted character of the work also emphasizes its material properties. Many of the materials have distinctly cultural and traditional references. Sinsel is interested in the general lure that emanates from certain substances due to a historically lent aura or integral physical quality rather than a specific historical weight.

In his paintings on linen, such as the portrait of a woman with chocolate and ribbons, Sinsel employs an explanatory simplicity that is reminiscent of Early Renaissance painting. The works carry a refined intensity and sensuality, and combine playfulness with melancholy. The works also strongly relate to the body. Although they can be seen as wearable or ingestible, or as physically enveloping or capturing us, we detect a distance in his works that pushes them into the realm of fetishism. The German title of the show, "Grete, erregt", could translate as "Grete excited", "Grete agitated" or "Grete aroused". It derives from Sinsel's inspiration for the show, the fairytale of Hansel & Gretel, a story the artist appreciated as erotically entertaining. Or so he says.

Daniel Sinsel was born in Bavaria and studied at Chelsea School of Art and the Royal College. He was selected for New Contemporaries in 2002 and Becks Futures at the ICA in 2006. A monograph of his work was published by Sadie Coles HQ in 2005.