He is one of the leading figures associated with the British Pop Art movement. The exhibition, a retrospective covering four decades, includes 18 works dating from 1963 to 2003. Tilson produced wooden reliefs and constructions, often brightly coloured, as well as his multiples, prints and paintings. From the mid-60s, his Geometry and Ziggurat works revealed his preoccupation with language, puzzle-making, visual play and symbols. 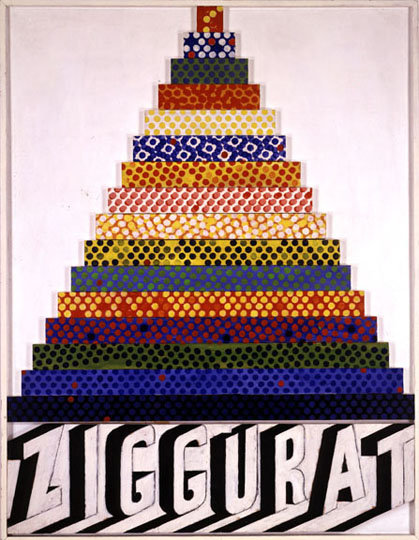 Joe Tilson, one of the leading figures associated with the British Pop Art movement, will be the subject of an exhibition at Waddington Galleries, London running from Wednesday 28 March – Saturday 21 April 2007.

The exhibition, a retrospective covering four decades, includes 18 works dating from 1963 to 2003. During this period, having drawn on his experience as a carpenter and joiner in the '40s, Tilson produced wooden reliefs and constructions, often brightly coloured, as well as his multiples, prints and paintings. From the mid-60s, Tilson's Geometry and Ziggurat (or Zikkurat) works revealed his preoccupation with language, puzzle-making, visual play and symbols.

In 1969-70, Tilson produced his Pages series, in response to the cultural, social and political shifts taking place during the '60s. Tilson and his wife, the artist Joslyn Morton, were actively involved in the anti-authoritarian politics of the moment and Pages, reflected his knowledge of the counterculture. Nearly all the Pages are made on partitioned wooden frames, which mimic the format of broadsheet publications. Tilson drew his titles from contemporary anti-establishment and underground publications, such as Black Dwarf, Muhammad Speaks and IT (International Times) and placed inside the compartments soft, bulging canvas sacs, screen-printed with images and text.

In Muhammad Speaks (1969), a shopping catalogue gun advertisement is set alongside images of gold medallist sprinter Tommie Smith during his historic Civil Rights protest at the 1968 Olympic Games and civil rights activist Malcolm X, assassinated in 1965; Ecology, Air, Earth, Fire, Water (1969-70) acknowledges ideologies and philosophies including those of Freud, Lévi-Strauss, Burroughs, Buckminster Fuller, Ho Chi Minh and Che Guevara. The combinations of apparently disparate elements may seem obscure, but they were integral to the profound statement Tilson was making about contemporary society.

In 1972 Tilson left London for Wiltshire. His move to the countryside marked a departure from his politically charged works of the '60s. He began to use a wider variety of media including stone, straw and rope. In works such as 'Eye Mantra' (1971-72) and 'Tree Alphabet' (1973) '...the now familiar use of repetition and grid arrangements of standard geometric shapes here take on a far more tranquil character, sometime trancelike and hypnotic, and a feeling for nature and the cycles of existence that recognises the oneness and interdependency of things.'

Since the early '70s Tilson has also regularly spent extended periods in Italy. Most recently his Conjunctions series (Conjunction Apollo, Zigolo (1997) and Conjunction Sangiovese, Varro (2003)) reveal his love of Italian culture, history and language in his use of colour, pattern, imagery and text.

The exhibition will be accompanied by fully illustrated catalogue with an essay by Marco Livingstone.

Joe Tilson came to prominence in the 1960s, responding to the emergence of Pop Art in England. He was born in London in 1928. From 1944 to 1946 he worked as a carpenter and cabinet maker, and then served in the R.A.F. He was one of a generation of British artists who studied at the Royal College of Art in the 1950s including Frank Auerbach, Leon Kossoff, R B Kitaj, Peter Blake, Allen Jones, Patrick Caulfield and David Hockney. In 1955, after winning the Rome Prize, he moved to Rome where he met his wife Joslyn Morton, also an artist. He returned to London in 1957, and from 1958 to 1963 he taught at St Martin’s School of Art, and subsequently at the Slade School of Fine Art, University College London and The School of Visual Arts, New York. Tilson’s first one-man show was held at the Marlborough Gallery, London, in 1962. His first retrospective was held at the Boyman’s Museum, Rotterdam in 1964. Further retrospective exhibitions were held at the Vancouver Art Gallery in 1979 and at the Arnolfini Gallery, Bristol in 1984. His work has been exhibited regularly in solo shows throughout the world: Cortona Centro Culturale Fontanella Borghese, Rome (1990), Plymouth City Museum (1991), Palazzo Pubblico, Siena (1995), Mestna Gallery, Ljubljana (1996) and Galleria Comunale d’Arte, Cesena (2000) and a major retrospective at the Royal Academy of Arts, London (2002). In 2004, he participated in the major Tate show, Art and the 60s. Among Tilson’s awards are the Gulbenkian Foundation Prize (1960) and the Grand Prix d’Honneur, Biennale of Ljubljana (1996). He was elected Royal Academician in 1991 (ARA 1985) and lives and works in London and Cortona, Tuscany.