This group exhibition that explores man and his social conditioning in relation to the animal nature of man. Internationally renowned artists (such as Carlos Amorales, Emmanuelle Antille, Marcus Coates, Mike Stubbs, Mark Wallinger...) guide us through the borderlands between rational man and brute beasts. This is a twilight realm where emotion and instinct come to the fore and social conditioning seems to ebb away. 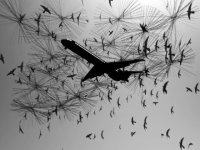 Dark Mirror is a group exhibition that explores man and his social conditioning in relation to the animal nature of man. Internationally renowned artists guide us through the borderlands between rational man and brute beasts. This is a twilight realm where emotion and instinct come to the fore and social conditioning seems to ebb away. The participating artists respond, each in their own manner, to their environment, so that aspects such as social codes, nature and animal emerge as subjects in the works.

The subject of the exhibition is coupled to the theme of the Night of Philosophy this year: the rational animal. Since antiquity mankind sees himself as the rational animal. Reason is the characteristic quality that distinguishes man from beast. Generally emotion is seen as the opposite of reason, so that reason calls upon to govern or limit the emotions. If that does not succeed, then man degenerates from a rational animal into an irrational beast.

Romanticism and Surrealism highly valued situations where the unrestrained reigned, and indeed sought them out. Since the Romantic age, reason has been seen merely as a more limited factor in defining our humanity. Reason is only one component of our consciousness, the tip of the iceberg – and artists since that time have shown us that extensively. The artworks in this exhibition reflect the harsh contemporary world so that we see human conduct in a different light. They reveal the thin line between man and beast, sense and insanity, where dreams and nightmares, reality and fantasy, serious situations and humor lie next to one another and serve as mirrors for our dubious conduct.

The double projection Dark Mirror (2005) by the Mexican Carlos Amorales depicts man and beast in a nightmarish animation full of contemporary popular symbols and Mexican icons. Wolves with human hands, people attacked by airplanes behaving like mosquitoes and airplanes hanging like bats from tree branches call up lots of associations. Familiar symbols and icons are shuffled through one another and mixed to form a bizarre world.

The video installation by the English artist Mike Stubbs, Cultural Quarter / City of Culture (2003-2004), shows sometimes contradictory elements such as social anomie, reform of social communities and the politicization of contemporary life. Using documentary means, Stubbs shows us the discrepancy between urban politics and local conduct: the naked truth. What happens behind the city’s official political plans, when the police are not present and the surveillance cameras are turned off? To what degree is our conduct dependent on government – and is conduct stimulated by the functioning of city administrators desirable or undesirable? These are some of the questions that the work calls up. Produced by Forma www.forma.org.uk

In the 2005 video entitled Sleeper by the British artist Mark Wallinger, the artist spends nine nights in a bear suit in the Neue Nationalgalerie in Berlin. In the video we see how, among other things, he wanders around bored, or lies down on the floor, while passers-by watch him. He does not act like a bear, nor does he make an attempt to do so; he is simply a man in a rented bear suit. But what do we see in this figure? And what do we want to see? Despite the enormous windows of the museum, not all the performance is visible, but the artist and the spectators hold up a mirror for us: art-related questions bob to the surface, and the function of nature as a tourist attraction is raised for discussion.

Work by Emmanuelle Antille often has social conduct, codes and rituals among family and friends in relation to their everyday circumstances as its subject. The two videos by Antille shown here, A Place we call Home (2006) and Invisible to the Rest (2006) show possible territories for loved ones. Human conduct is central for Antille, but as much as possible it takes place apart from the familiar world and social codes, in natural settings or isolated houses. This raises the question of whether this is dream or reality – or whether it is what we want to see?

In his work Marcus Coates seeks the boundary between the human and non-human. The filmed record of the performance Journey to the Lower World (2004) permits the audience to see shamanic ritual in which he physically and mentally seeks out the animal world, a tradition that is customary among the Tuvak shamans in Siberia. Coates wants to examine whether such ritual, which comes out of the lives of traditional peoples themselves, is still desirable, understandable and, particularly, acceptable in our present society.

Walking Conference: Man is a wolf to man
In cooperation with the Night of Philosophy
Conducted by philosopher Katja Rodenburg
March 31
Start: 21.00 h.
Door open: 20.30 h.
Drawing on the works in the exhibition, we will be exploring the boundary in ourselves between man and animal. At what point can we say animals begin to become human, and where does man shade off into beast? Together with the French philosopher Georges Bataille (1897-1962) we will tackle this intriguing question, an issue that the first men already visualized in the paintings in the famous caves at Lascaux.
Your guides are: Katja Rodenburg (philosopher), Marga van Mechelen (art historian, University of Amsterdam), Petra Heck (curator Netherlands Media Art Institute).
Admission € 5,- (students 3,50)