Das Kackabet. The artists show a project on which they have experimented for some time. It resumes their effort to circumvent the hopeless corruption and compression of language and to create liberation or an embodiment of the word via an orifice not originally intended fort his purpose. 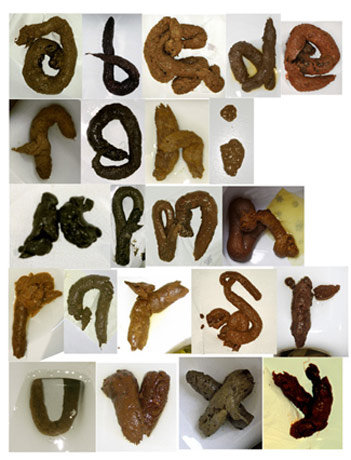 Galerie Nicola von Senger is pleased to inaugurate their new space at Limmatstrasse 275 with an exhibition by gelitin. After their first large museum exhibit at the Kunsthaus Bregenz last year, gelitin are already preparing for their next solo show at the Musée d’Art Moderne de Paris (January 2008). Gelitin have time and again been misunderstood „as the Bad Good Boys of the international art scene“ (Eckhard Schneider). They have earned this reputation with actions and dadaist-anarchic installations that test limits: the Weltwunder at Expo 2000, The B Thing (balcony at the world trade center), the Arc de Triomphe, or the giant knit rabbit in the Piedmont.

In their first Swiss solo exhibition in five years, the artists will show a project on which they have experimented for some time. It resumes their effort to „circumvent the hopeless corruption and compression of language and to create liberation or an embodiment of the word via an orifice not originally intended fort his purpose“ (Christian Egger). A first instalment of this work was shown at the Kunsthaus Bregenz last year. Now that we have had time to miss what we have seen there, gelitin gives us the Kackabet. „It is a matter of replacing articulated language with a natural language that deviates from it and whose expressive capacity will be equal to that of the language of words (Antonin Artaud).

It is well known that the body plays an important role in the work of gelitin - installations such as Schlund, Flaschomat, or Mudplex have put the body at the center of their work or even made it a part of it - and works such as the urine-stalactite sculpture Zapf de Pipi at the Moscow Biennial 2005 have already shown how bodily excretions can be formed into art, whereby participation is often as important as the result. With the Kackabet, gelitin have created a font that is capable of lending expression to their sensibilities in terms of both aesthetics and content. This analphabet is a symbol that brings the abstraction of language within the field of experience of the body, which is in turn implicated in what is being communicated. In their artist statement gelitin tells of a reconciliation of the body and its excretions:

Gelitin didn’t go gaga. In addition there are rare finds from time to time: “A severed foot, or at least the bones thereof, have been found in a cesspit in Göttingen. We don’t even want to think of a criminal case; there was probably a surgeon in the house who performed an amputation. It wasn’t disposed of as it would today but instead it just went down into the cesspit.”
Gregor Staiger, March 2007