First International Fair of the Caribbean. The show will feature approximately 60 exhibitors from Puerto Rico, Latin America, the United States and Europe. The section "In the Spot" is conceived as a dynamic section of flexible and transgressive character, where current curatorial practices are explored as well as the meaning and validity of the fair as an exhibition platform. 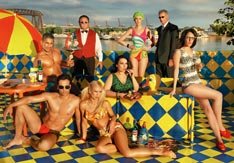 First International Fair of the Caribbean

CIRCA Puerto Rico 07, the first international art fair of the Caribbean and Central America, will be held from March 30 to April 2nd, 2007 at the New Puerto Rico Convention Center in San Juan. The fair will feature approximately 60 exhibitors from Puerto Rico, Latin America, the United States and Europe.

What the international press had to say about CIRCA ‘06:
• “a highly enthusiastic venture into art and commerce” (Contemporary, London)
• “the confirmation that... Puerto Rico has the potential to become the economic epicenter of visual art and culture in the region” (Arte al día, Buenos Aires)
• “Whatever reservations one might have about art fairs in general, it is hard to begrudge Puerto Rico its moment in the sun.” (artnet.com, New York)
• “a commercial enterprise with considerable aesthetic punch” (Artnexus, Miami)

CIRCA is an emerging fair, the only art fair of the Caribbean and Central America, responding to an ever growing and dynamic art community and a prominent group of collectors, such as Alberto de la Cruz, Diana and Manolo Berezdivin, César Reyes, Ramón Luis Lugo, John Belk, Rosalía and Humberto Ugobono, among others. Referential museums such as Museo de Arte de Puerto Rico and Museo de Arte de Ponce, as well as private galleries have created a platform of young emerging Puerto Rican artists, from which we could mention Allora & Calzadilla, Melvín Martínez, Javier Cambre, Bubú Negrón and Enoc Pérez, among others. As expressed by its Artistic Directors, Celina Nogueras Cuevas and Paco Barragán, “The artistic focus of the fair allows for innovative dialogues and discoveries in contemporary art while enjoying in the warmth and effervescent climate of Puerto Rico”. CIRCA Puerto Rico 07 will offer local and international collectors an interesting selection of quality contemporary art in an intimate platform.

Curated Exhibition at Circa

The section In the Spot returns this year with the subtitle: What you see is what you get. Created by Spanish curator Paco Barragán, In the Spot is conceived as a dynamic section of flexible and transgressive character, where current curatorial practices are explored as well as the meaning and validity of the fair as an exhibition platform.

Each day, a guest curator will organize an exhibition with the works exhibited at the fair as point of reference; at the end of the day the curator will start a critical dialogue with the audience. Guest curators for this year’s edition are, among others: Silvia Karman Cubiñá, director of the Moore Space (Miami) and Amanda Coulson, director of the Volta Show (Basel).

In addition, CIRCA will have a single-channel video show curated by Lee Wells, co-founder of Perpetualartmachine.com. "Between the stone and the flower” will consist of two short film cycles discussing the subjects of politics and beauty. “A Peaceful Night” explores the social and political circumstances of globalism in relation to international culture, while “In the Eye of the Beholder” analyzes the aesthetic precepts of the sublime, and how the new technologies redefine the identity and relations of the contemporary world (for further information please visit www.perpetualartmachine.com or send a message to lee@leewells.org).
Likewise, District CIRCA will host museums, independent spaces, art magazines and journals offering information on their programs, curatorial practices and services.

Parallel Events
As the year before, CIRCA will become the scenario of a stimulating program of openings and parallel events. Museo de Arte de Puerto Rico (MAPR), will open its section In Focus: Alberto de la Cruz Collection, where every year works from collections of international relevance will be highlighted. The exhibition: Artist Interrumpted by Mari Mater O’Neill, complements MAPR´s offerings; On the other hand, during breakfast sessions at Espacio 1414, visitors will also be able to take in the exhibition Globalization: Indications/ secondary effects/ warnings, curated by Julieta González. The exhibition examines the subject of globalization through a selection of works from the Berezdivin collection. With the presentation of: Allora y Calzadilla, Zhao Bandi, Hai Bo, Cristoph Büchel, Carolina Caycedo, Cao Fei, Luis Gispert, Dan Graham, Arturo Herrera, Alfredo Jaar, Nikki Lee, Mark Lombardi, Nicola López, Sarah Morris, Antoni Muntadas, Takashi Murakami, Hélio Oiticica, Gabriel Orozco, Martha Rosler, Reena Spraulings, Superflex and Aaron Young, among others. There will also be complimentary visits to the houses of important collections, from which we may highlight the Colección Ramón Luis Lugo with Deutsch artworks of noteworthy artists such as: Immendorf, Beuys, Polke and Hirst, among others.