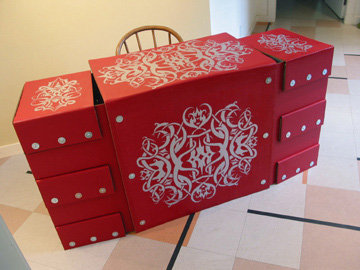 Peggy Diggs' project, WorkOut, was inspired by society's future need for living in constricted living conditions due to global warming over the next 20 years. More people will be living in emergency shelters due to natural disasters or will downsize their homes due to rising costs of fuel. Diggs chose to collaborate with a community that had experience in confined living habitats and, with a Creative Capital grant, she worked with 15 incarcerated men (over 90% of them incarcerated for life) at the State Correctional Institution at Graterford, outside Philadelphia, for 18 months in 2005-2006. After design workshops and spatial problem-solving exercises, they produced cardboard models of their ideas. All materials to construct the objects had to be in compliance with the prison's strict rules. One prototype was chosen by the prisoners for full-scale production - a partially collapsible desk/storage unit to be made out of sturdy cardboard. The units were hand-made and painted by the inmates in their aesthetic influences: tattoos, grafitti art, labyrinths, tribal art, and the backs of playing cards. The prison forbade the selling of the units, so the prisoners decided to donate 20 desks to residents at Riverview Home, a Philadelphia city-run care facility for ailing and elderly homeless individuals. On view in the exhibition will be examples of the desks as well as documentation of the project.

Laurel Roth and Andy Diaz Hope have collaborated on a custom chandelier titled Blood, Money and Tears. The artists chose several chandeliers which were then dissassembled, chromed at a Harley shop, and reassembled with certain key elements upside down to create a mirroring effect. Dripping with hundreds of syringes and garlanded with strings of multicored pills forming a mandala pattern, and Swarovski crystal, the chandelier becomes a vehicle for the viewer to meditate on society's use of drugs and pharmaceutical, whether recreational or prescribed, to modify behavior, emotion and perception.

Laurel Roth will also explore the man-controlled extremism of designer pets by showing pet skulls made of resin. The chihuahua, the persian cat, the pit bull and the english bulldog represent animals that we have modified for our own purposes and pleasure to such extremes that we have created difficulties for both the animals and ourselves.

Heidi Schlatter's project, The Globex Corporation, focuses on the New Urbanist community of Celebration, a town created in Florida by the Disney Corporation. Celebration's mission was to promote a return to the small-town American scale and values of an earlier era in America - a nostalgia for a period in American history which may never have truly existed. Schlatter's work looks at the myth of small town America, and how it is repackaged and sold as a solid real estate investment and as a premise for continued sprawl. It examines architecture as an instrument of social control with the gloss of utopian vision as its veneer. Her "look-alike" photographs present images of houses from Celebration next to examples of historic small town homes from the Northeastern U.S., in an attempt to find the original iconic architectural styles that the Disney home designs were based on. The photographs resemble real estate ads, while referencing documentary photography of banal, similar structures. The lightbox montage image presents a photographic sampler - a generalized vision of the Celebration experience.