Her films and photographs transcend their documentary function to lyrically investigate the very fabric of individuality and self-sufficiency, and to expansively meditate on the role of the artist in a time of flux. 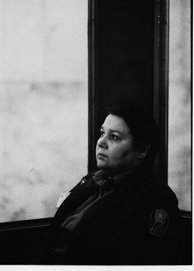 Isle of Sparks is Moscow-based Olga Chernysheva's inaugural New York solo exhibition. Chernysheva uses a range of media to produce expressive, penetrating artworks that take contemporary Russian experience as their theme. Her often unwitting subjects are observed negotiating a society in turbulence, where a common sense of a shared future has disintegrated. Her films and photographs transcend their documentary function to lyrically investigate the very fabric of individuality and self-sufficiency, and to expansively meditate on the role of the artist in a time of flux.

The exhibition, comprising videos and selections from a number of photographic series, presents a broad range of work produced by Chernysheva in recent years. The Train (2003) is a remarkable video journey through the carriages of a Russian intercity train that recalls the early Realist cinema of Vertov. The stoic passengers and staff seem largely oblivious to the camera-person passing by them, walking toward the back of the train. The video is both an affecting window on contemporary Russia and a shrewd re-working of conventional film-making: the movement through the train and the encounters with different individuals mimic dramatic narrative structure.

On Duty (2007) is a group of large black and white photographic portraits on matte paper of uniformed functionaries, who spend their time watching or, perhaps more to the point, solemnly doing nothing. Rather than merely satirizing them and their roles, Chernysheva is interested in capturing their ambivalent and ambiguous gazes.

Waiting for the Miracle (2000) is a startling set of photographs of women's woolen hats taken from behind. Appearing like sea anemones or alien life-forms, these mundane objects are transformed into wondrous beings. As Chernysheva writes, "Usual, familiar images become mysterious and magnetic'; here the prosaic becomes magical.

The Anabiosis (2000) photographic series documents people and plants completely wrapped up so they can survive outside in the depths of winter. Ice fishermen, covered totally in plastic to lock out the perilous cold, resemble frozen shrouds or incubators of pod-people. These initially disturbing images have a stark yet expressive quality that stylizes the human form.

Windows (2007) is a multi-channel video work, comprising a series of screens of people videotaped through their apartment windows. We voyeuristically and compulsively watch as the inhabitants, oblivious to the camera observing them, iron underwear, argue, party, or feed their cats. These mini-dramas of everyday life, at times resembling soap opera, disturb our notions of how reality should "really" look.

Anonymous (2004) is a two channel video work that captures two people outdoors in summertime. In Part I a middle-aged woman changes into her bathing suit in a crowded park to the voice-over of a instructor guiding women in sexual self-massage. In Part II a partly obscured, very drunken man attempts a life and death struggle to open a bottle of vodka. In both videos passersby seem largely oblivious to the main character, even though they are publicly exposing themselves in their different ways. Both videos end with an extreme zoom back, putting into perspective the microscopic size of the slice of life being witnessed.