An encounter between two Collections. Works by 18 international artists 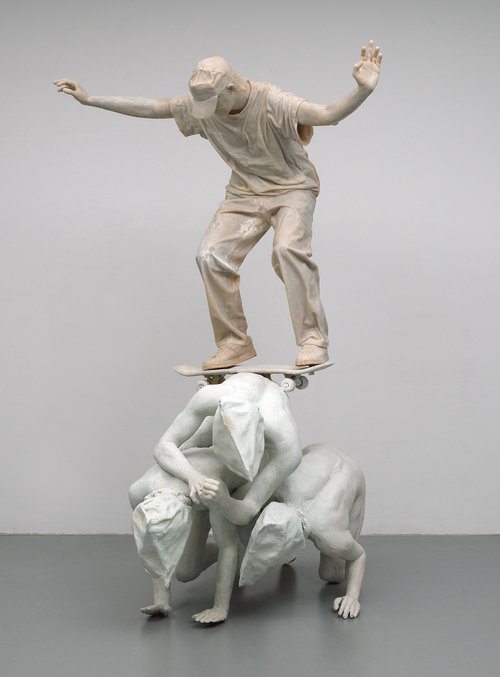 An Encounter Between Two Collections

Art still has a commitment to fulfil in the realms of emotional, intellectual and political responsibility and, in fact, in spite of the widely-held view that much of the art done today represents an apparent renouncing of its premises of idealism, Utopia and nobility, it is consumed by other principles of collaborationism, pragmatism and superficiality.
Daniel Castillejo (taken from the exhibition catalogue)

ARTIUM, Basque Centre-Museum of Contemporary Art, and the Fundación “la Caixa”, present the exhibition “Love, think, resist. Encounter between two collections”, an exhibition that attempts to illustrate the level of ethical commitment of many of today's artists in contrast to the evermore widespread tendency towards a sense of predictability within the art system. The exhibition consists of 19 artworks by 18 national and international artists, taken from two of the most important art collections in Spain. Each one of the artists approaches the challenges of existence in a different way, from rapidly changing lifestyles to solitude, lack of communication and social and political conflicts. The pieces selected for the exhibition, most of which are video installations, but which also includes sculptures, paintings and photographs, take up the whole of the South gallery of the Centre- Museum. This show represents a unique opportunity to see these works in the same location. Works by Bill Viola, Doug Aitken, Tacita Dean, Txomin Badiola, El Perro and Antoni Abad, among others, form part of “Love, think and resist”, a joint production of ARTIUM and the Fundación “la Caixa”, and curated by Nimfa Bisbe and Daniel Castillejo.

“Love, think, resist. Encounter between two collections ”is a theme exhibition based on the idea of establishing a dialogue between two art collections, those of the Fundación “la Caixa” and of ARTIUM, Basque Centre-Museum of Contemporary Art”. Although very different in nature, they are considered to be among the most important collections of their kind. The differences between both collections, remarkable due to the context in which they were created and developed, can be seen clearly in their respective goals, namely, international art in the case of the Fundación “la Caixa”, and Spanish art in the case of ARTIUM, although the latter recently broadened the basis of its collection to include international art.

Based on the initial contact between both collections, the exhibition is developed around the concept of “the life wish”, coined by the philosopher Santiago López Petit, whose last book “Love and think. The hatred of wanting to live” provided, in part, the name of the exhibition. In an evermore complex society in which pragmatism and "going with the flow" are held up more and more as lifestyle models , many people continue to look on life as a challenge, an act of resistance which they face with the audacity of their "life wish", of which the fact of loving and thinking are perhaps its two most radical manifestations.

Similarly, the opinion that the art system is dominated by an aura of superficiality and that artists have abandoned idealism in favour of pragmatism, is accepted more and more. “Love, think, resist” attempts to demonstrate the opposite, in other words, that today's art and artists maintain a high level of intellectual and emotional commitment. This is the message conveyed by the 19 artists whose works form part of this exhibition. Nine of these artworks have been taken from the collection of the Fundación “la Caixa” and 10 come from the ARTIUM collection. Ten audiovisual montages, between videos, films and video installations, two paintings, one photograph, three sculptures and two installations make up the selection. In these, the artists explore the world in different ways, focusing in some cases upon the speed with which our lifestyles are changing and in others, the difficulties of communication and understanding, the uncertainty of life, the solitude of the individual and the treatment by the mass media of the social and political situation.

The first exhibit that visitors see is the film by Tacita Dean “Gellert” (1998). With its unhurried denouement, this 16 mm film conveys a desire to escape from and forget external world. Opposite, Bill Viola's installation “Hall of Whispers” (1995) reminds us of how difficult it is on occasions to communicate and to make oneself heard and understood. Reality is given a much harsher treatment in paintings by Simeón Sáiz Ruiz, “Matanza en Racak” (2002), whose subject is the coldness with which death is dealt with on TV, and by Guillermo Kuitca, “Sin título” (1991), which portrays the city has a place of suffering and solitude.

The video installation by Doug Aitken, “Interiors” (2002), seems to allude to the confusion of messages in the mass media, while the two works by El Perro, the sculpture “Memorial” (2005) and the photograph “Skating Irak” (2005), represent an explicit and highly ironical denouncement of the humiliation of the enemy. Eija- Lhisa Ahtila presents the video installation “Consolation service” (1999), which makes reference to the sometimes difficult world of personal relations and living together, while, a little further on, Antoni Abad, with the video “Últimos deseos” (1995) in which images suggestive of the difficult balance of life, in which there is no safety net, are projected onto the heads of spectators from above. In contrast, the video installation by Montserrat Soto “Vídeo viento 1, 2, 3” (2003) places the spectator in a refuge from which the force of a storm outside can be seen.

Elena del Rivero converts her interior world into a visual experience through “300 letters to the Mother” (1995), an installation made up of 300 letters written to the figure of the mother, embroidered and sewn together with drawings and collages. Following this, “Para la mente” (1992), by Eva Lootz, raises multiple questions about the feminine condition. Txomin Badiola, with “SOS. E3 Servidumbre de la vida y el carácter de las sombras” (2001), seems to send out a message calling for help, while Stephen Dean, “Volta (Bandeira)” (2003) transfers his fascination for colour and the rituals of life to a football ground Maracaná, in a kind of collective “performance”.

Andreas Slominski reveals with “Sin título” (1994), the recreation of a bicycle of an indigent loaded with bags and objects, a fatalist vision of subsistence in the city; with “Las armas y los cuidados” (1992), Francisco Ruiz de Infante introduces the spectator to a disturbing ambience, of a surgical white with an alarming play of lights and shade. Opposite, María Ribot offers her “Despliegue” (2001), a video installation in which the spectator is witness to the intimacy of creation. The exhibition concludes with the installation by Leopoldo Ferrán and Agustina Otero “Volad, volad malditos, que si no os cogiere yo, os cogiera el diablo” (2000), a surreal scene in which several books, opened and suspended over the floor, appear to create a strange flock of birds; and the video installation by Eulalia Valdosera entitled “Habitación” (1996), in which the characters, including the spectator himself/herself, are reduced to anonymous shadows whose day-to-day activities are dominated by a lack of communication and by monotony.

Exhibition catalogue with texts by Daniel Castillejo and Nimfa Bisbe
Associated activities: lectures by Santiago López Petit (May 29) and Marina Garcés (June 21): projection of the film “El taxista ful”, By Jo Sol (May 21)