Now as we have gone as far as we can 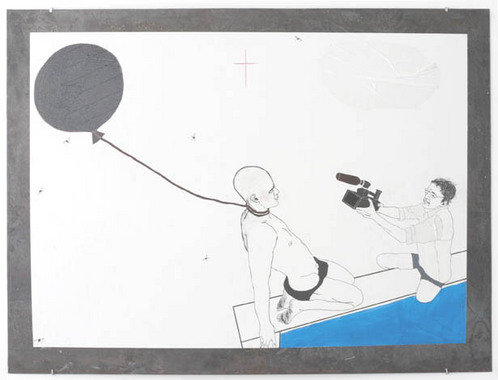 Now as we have gone as far as we can

Reality under the stuffy cover of "art".. No trick cheeky enough, no exciting techniques, no effects strong enough...(JT)

Galerie Conrads is thrilled to present the first solo exhibiton of Jelena Tomasevic in Germany. Entitled "Now as we have gone as far as we can go", the show contains new works on steel exhibited in the exhibition "Life, Art and Confusion" curated by René Block for October Salon, Belgrade Biennale 2006.

Which was reviewed in an article in NY Arts Magazine by Jovana Stokic, Institute of Fine Arts, New York University: "The biggest impression was made by the series of paintings on steel by young Montenegrin artist Jelena Tomasevic, a continuation of her works which represented Serbia and Montenegro at the 51st Venice Biennale. Tomasevic created an installation comprised of eight big formats on which figures and architectural objects hover in a disjointed, post- utopian universe.

The figures are not really engaged in any of the actions—they are merely posing as replicas from fashion magazines. Female figures in high heels, dressed in cool urban outfits insinuate ominous actions in which violence is only suggested. They signal the advent of the late capitalist culture of the spectacle—as a represented version of the world, which pushed itself to a dead-end. These representations, often of a domestic feminine space, show how the artist conquers a "heroic dimension" by using "male" material such as steel on such a large scale."

Jelena Tomasevic's paintings of figures, interiors, and architectural models are taken from her personal photographic archive, magazines, and newspapers. The paintings on pure 3 mm steel panels, each approximately 100 x 160 cm, are hung flat on the wall, and the effect is an installation of individual storyboards. Influenced by film directors such as Jean-Luc Goddard and Lars Van Trier, these paintings Tomasevic explain, emphasize the human need for the meaning of life, whatever it may be.