Many of the artist's recent paintings are cryptic and refer to conditions of interiority. Taking place in intimate settings, where figures delineate their physical boundaries, they render the recognizable indeterminate, presenting the everyday and the historical as slightly shifted, particular and mysterious. 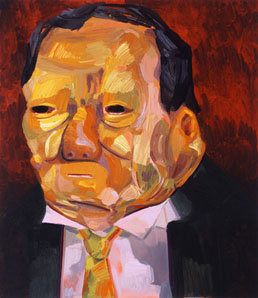 "We live in Fortean times. We live in the beginning of a voodoo age of magic superstition and ignorance. We are the last generation that will ever know what it was like, to live in an enlightened world".
David Thomas (of the Cleveland band Pere Ubu) 1996

Schutz's exhibition "Stand By Earth Man" is titled after a live performance by "David Thomas and Two Pale Boys" in which Thomas recalls mishearing Tammy Wynette's "Stand by Your Man" as "Stand by Earth Man". The paintings in this exhibition are conceived as stories to our future selves, or miscues to that future.

Many of Schutz's recent paintings are cryptic, narratively incomplete and refer to conditions of interiority. They take place in intimate settings, where figures delineate their physical boundaries, looking into and through pictorial divisions. There are private spaces where the viewer is blocked from entry and public spaces turned private where the subject is not allowed to leave.

Often the viewer is left to meditate on the back of a head or an unknowable exchange. Objects take on an uncanny presence and abstraction is used as a secret language. The paintings depict recurrent phenomena, such as plague, birth, driving and the tide.

In this exhibition, Schutz uses titles as proposals for the process of articulation and imagination. The titles "How we would give birth", "How we would drive, "How we would talk" and "How we would dance" are simple and meant to touch on basic activities of our present lives. The tense of these titles locates the subject in either a speculative past or future, while alluding to a potential, fictional future audience. Schutz renders the recognizable indeterminate, presenting the everyday and the historical as slightly shifted, particular and mysterious.

Dana Schutz was born in 1976 in Livonia, Michigan and received an MFA in 2002 from Columbia University. She has had solo exhibitions at the Rose Museum at Brandeis University, Museum of Contemporary Art Cleveland, and the Nerman Museum of Contemporary Art, Kansas. Her work has also been included in group exhibitions at the Sammlung Goetz, Munich, the Royal Academy of Art, London, and the Museum of Modern Art, New York. "Stand by Earth Man" is Schutz's third solo show with Zach Feuer Gallery. She lives and works in Brooklyn, New York.