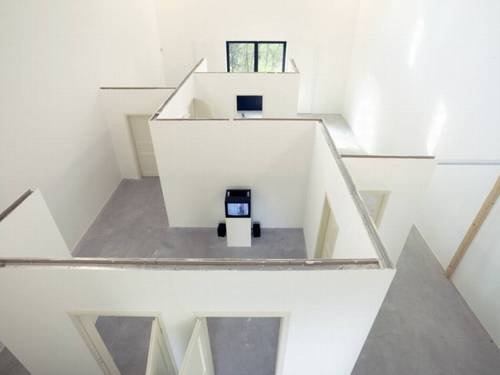 Doors, an exhibition at the Portikus, shows a collaborative project developed by Judith Hopf and Henrik Olesen. Doors offers passageways, entrances and exits, detours and cul-de-sacs, and repeatedly asks the viewer to come to a new decision. The different possibilities of action—opening doors, moving (backward) in space—engender new spatial constellations. They affect what is behind, what remains initially hidden from view, and necessitate unforeseen changes in direction and sidestepping gestures. This sculptural space, conceived as a model and designed in the manner of a stage setting, at once also presents an exaggerated delineation of social patterns, in which limitations, compulsions, contradictions and strictures, but also possibilities for decisions emerge into view.

In a similar manner, Judith Hopf and Henrik Olesen also approach the subject of spatial and personal demarcation by means of film. They re-stage a scene from Luis Buñuel’s film Le Fantôme de la liberté (The Phantom of Liberty, 1974) in which numerous scenes play out behind doors; we gain only brief insights into the former by opening the latter. As though in a comedy of manners, people from different backgrounds meet by chance and only for brief moments in the hallway, conduct exchanges in small gestures, commingle by accident with the reality of the lives of others, only to disappear again into their own worlds. Another remake, of Fluxus artist George Landow’s film The Evil Faerie (1966), points toward the notion of art maintained by the Fluxus movement, where art was discovered amid the gestures of everyday life and understood as a realization of human freedom.

Judith Hopf’s and Henrik Olesen’s practice evinces a productively critical consciousness of socially propagated normalizations. They question the conventions of the everyday with a view to their socio-political effects. They thus detect a social pressure upon different forms of life that disturb the public consensus, and are hence marginalized or rendered invisible.

Judith Hopf most recently showed works during the exhibition “No Matter How Bright the Light, the Crossing Occurs at Night” at the Kunstwerke, Berlin, and at Extra City, Antwerpen; her works were also on view at the Secession, Vienna, and at Gallery Andreas Huber, Vienna.

Henrik Olesen had an exhibition last year at the Generali Foundation, Vienna, and most recently showed works at the exhibition space Mehringdamm 72, Berlin.

A publication will accompany this exhibition at the Portikus (scheduled to appear in late July, 2007).