Photographs by Lisa Kereszi. She explores venues of cheap popular entertainment which offer an escape into a realm of sensory fantasy and satisfy our desire to be transported, hoodwinked or tantalized. Photographing between 2005 and 2006 in New York's downtown burlesque clubs and the beauty salons of Nepal, Sarah Schorr has created still-lifes, which explore the notion of transformation as it relates to idea of feminine beauty. 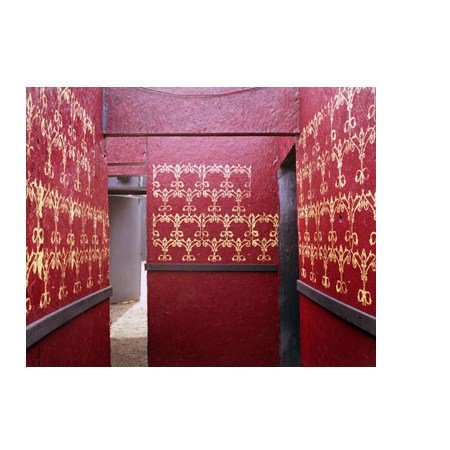 Yancey Richardson Gallery is pleased to present Cheap Thrills, an exhibition of photographs by Lisa Kereszi. In this, her second exhibition at the gallery, Kereszi addresses our need for fantasy, glamour and escape. Photographing in movie theatres, haunted houses, strip joints and nightclub lounges, she explores venues of cheap popular entertainment which offer an escape into a realm of sensory fantasy and satisfy our desire to be transported, hoodwinked or tantalized. With a detective's coolly observant eye for the telling detail, Kereszi peels back the illusionism of such spaces to reveal the cheap materials, crude construction and pedestrian theatrics that are the simple ingredients of illusion and shows us how very little we require to buy into the fantasy.

The daughter of a junkyard proprietor and a one-time antique dealer, Kereszi relishes the mundane details of the American cultural landscape, transforming them into "semi-abstract images of transcendent beauty" (Art on Paper, May/June 2005). Kereszi was awarded the Baum Award for the Best Emerging American Photographer in 2005 and was featured on the cover of Artnews March 2006 issue. In 2003 the Public Art Fund of New York commissioned her to photograph Governor's Island, resulting in a show at the Municipal Art Society and Mayor Bloomberg's offices. A book on the Governor's Island commission is available
through the gallery or D.A.P.

Kereszi’s photographs have been exhibited at the Whitney Museum of American Art, the Berkeley Art Museum, the New Museum, the Aldrich Museum and the Brooklyn Museum of Art.

Yancey Richardson Gallery is pleased to present Transformer, a debut exhibition of photographs by Sarah Schorr. Photographing between 2005 and 2006 in New York’s downtown burlesque clubs and the beauty salons of Nepal, Schorr has created still-lifes, which explore the notion of transformation as it relates to idea of feminine beauty.

Schorr began photographing burlesque performers in New York's East Village and Lower East Side in 2003, eventually developing friendships with many of the artists. Over time she moved from documenting the women’s lives, onstage and off, to cataloguing the personal effects used by the performers to transform themselves into their individual stage personalities. Schorr borrowed items such as eye shadow palettes, false eyelashes, platform shoes, and costume jewelry that the dancers, as well as women in general, use to make themselves feel beautiful. Placed as singular elements directly on a photographic scanner, these glamorizing accessories appear as exotic specimens in a natural history museum. Living in Nepal and India for nine months in 2006, Schorr continued this theme of transformation and beautification by making photographic still lives of the soaps and skin bleaching creams used to lighten skin, which is perceived as more attractive in these cultures.

A 2006 graduate of School of Visual Arts, Schorr lives and works in New York. A catalog of Shorr's complete burlesque project, Borrowed Glitter, is available through the gallery.