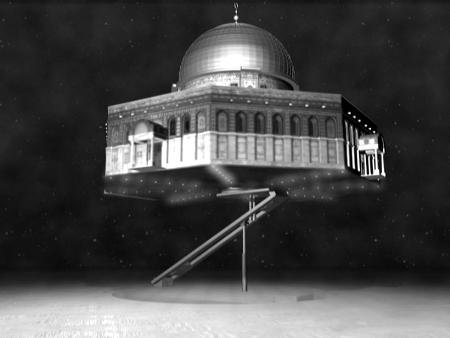 Wael Shawky’s exhibition, entitled The Forty Days Road. Wet Culture – Dry Culture, is the third part of the Transculture project. This time Bunkier Sztuki will present an artist who, being from Egypt, does not belong to European culture circle. What is more, he did not experience emigration, which was typical of other artists invited to take part in Transculture.

Shawky leads a nomadic type of life, he travels a lot – which is an experience popular in the artistic world, but despite this fact he is deeply bound with his country. He was on a scholarship in Turkey, the Unites States, Greece and Switzerland. Thanks to his numerous journeys, specific character of different cultures is familiar to him, especially the character of Western culture. But he can also observe these cultures from the outside, remembering about his own identity. As an Egyptian, a Muslim, and as an artist educated in Egypt and in the US he can see Europe from the outside, he has never lived here permanently – in contrast to other artists taking part in Transculture cycle.

According to Wael Shawky, the artist’s function is that of a ‘translator’. He is then ‘translating’ to visual language his observations concerning social changes that his homeland is undergoing. He creates a portrait of contemporary Egyptian society, which is characterized by unclear divisions, where new lifestyles clash with tradition. This society can be called ‘hybrid’ because it consists of both old, often very archaic cultures (pastoral, agricultural) and globalized world’s cultures, especially Western popular culture. In one of his works, called Green Land Circus, Shawky constructed a model of a several-storey block of flats being inspired by traditional look of tribal cottages that one can still see in Northern Africa, for which he used concrete – a material symbolizing modernity. However, it should be emphasized that using the stereotypes through which cultures are perceived as a basis for his works, Wael Shawky negates evaluating them in a simple way; noticing differences in their stage of development he questions this sort of approach which considers some cultures superior to others.

At the exhibition at Bunkier Sztuki the artist presents three films arranged in big-size multi-screen projections. The title of the exhibition was inspired by the work called Darb el Arbaeen which will also be shown. This film refers to a trade route which exists since antiquity and links Egypt and Sudan. It is a story that takes place somewhere inbetween reality and dream, the main theme being a journey through a desert. Wael Shawky confronts two Egyptian cultures co-existing since ages: the culture of nomadic people and that of farmers. The film refers to the process of annexation of this nomadic culture by the other. The artist undermines the popular view according to which the latter is considered ‘higher’, superior.

Two other films are concerned with equally or even more sensitive problem – of religiousness in contemporary world. The film entitled Digital Church was recorded in Krakow. The artist went to the Jesuist church in Kopernika street to pray from the holy writ of Koran. The prayer, read in Arabic, is not uderstood by people entering the church. Wael Shawky recites a sura on the life of Mary which is considered to be one of the most beautiful ones in Koran. The film produces a surprising effect: believers of two religions that are considered to be hostile – Catholicism and Islam – are praying in one place without disturbing one another (during the recording people in church prayed and confided as usual). However, this prayer is not said together; the believers of the two religions are merely tolerant of each other. Therefore, Shawky points to the spheres in which two different cultures can co-exist but at the same time he is careful and he indicates that the lack of hostility, even if it is merely indifference, becomes nowadays a value itself.

The work entitled Al Aqsa Park is an animation showing one of the holiest places of Islam, namely the Dome of the Rock, which belongs to the Al-Aqsa complex in Jerusalem. This dome, together with the mosque, are both a symbol and a trouble spot on the map of the world, it is where the intifadas against Israel had started. Wael Shawky changes the temple into a carousel in a fairground. He shows the holy place in Western popular culture stylistics. This work can be interpreted as critical of any fundamentalisms which are partly generated by exessive attachement to places and symbols.

Shawky’s exhibition introduces a new subject matter into the Transculture cycle. The title itself refers to journeys, reminding that it was thanks to movement, thanks to ancient trade route, that cultures developed and contact between people of different origin, between different languages, systems of values and customs was possible. Shawky seems not to believe in the existence of cultures in their ‘pure’ stage, in their undisturbed, ideal development. Some cultures will always devour others, we will always encounter ‘cross-breeds’ – and this is just what is so fascinating. He also reminds us that there are impassable cultural barriers – and they should be respected.

Bunkier Sztuki
Plac Szczepanski 3a - Krakow
Hours: from 11.00 am till 6.00 pm – every day except Mondays on Thursday the Gallery is open until 8.00 pm
Admission: Full-price ticket 6 zl; Concessions 3 zl; Family ticket 12 zl