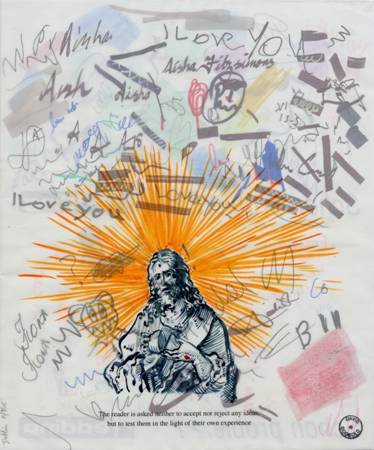 Godbold creates small ink drawings on sheets of tracing paper, and overlays them onto scraps of found paper, ranging from discarded shopping lists and diary pages to love letters and homework assignments. He then inserts his own textual element, adding a typed quotation, remark, or truism to create a satirical interplay between text and image.

The two large-scale paintings will be applied directly to gallery walls. One depicts St. Sebastian, while the other is an apocalyptic scene inserted into a dense wooded landscape painted in a style reminiscent of 16th century Dutch painting.
David Godbold was born in England in 1961 and has lived in Dublin for the past 17 years. The show at Mitchell-Innes & Nash will be Godbold’s second United States solo exhibition, following a 2006 exhibition at Jack Hanley gallery in San Francisco. From 1999 – 2000, Godbold held a residency at PS1 Contemporary Art Center in New York . He holds a Ph.D. in Art History & Philosophy from the University of Ireland , and a BA in Fine Art from the University of London, Goldsmiths’ College. He has exhibited widely throughout Europe and the United States, and his work is represented in various public and private collections.