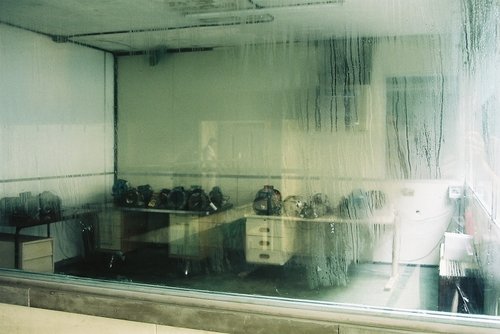 During the last seven years, the young Italian artist Micol Assaël (*1979) has produced a remarkable body of work. Assaël’s condensed and disquieting installations involve alterations to existing architectural structures, such as drilling a succession of holes, penetrating in a line through several gallery walls at Fondazione Sandretto Re Rebaudengo, Turin, in 2002. In other works, the artist constructs specific new spaces, or rearranges existing ones. In her installation at the Venice Biennale 2003 she fitted out an entire room with iron and installed powerful air vents, which blew hot, gale-force air inside the space. In their restrained use of furniture and technical equipment, such as old generators, exposed electric circuits and various other hardware, the modestly sized, cubic spaces built or arranged by Assaël remind one of abandoned prison cells, execution chambers or refrigerating rooms. The artist deals besides with several set-ups for behavioural experiments on human beings. In these performative situations, the viewer, unaware of his status as a subject of investigation, becomes physically and mentally affected and transformed by Assaël’s scenarios. Her works can hardly be witnessed passively, as they provoke and at times even impose interaction, which in due course inflicts physical and psychological unease.

In the new installation Chizhevsky Lessons (2007) at the Kunsthalle Basel, the artist references the Russian scientist Alexander Chizhevsky (1897-1964), whose research focused on the correlation between solar activity and significant historical events such as wars and revolutions. Chizhevsky conducted experiments testing the influence of ionised air on living creatures and became known as one of the pioneers of space biology. Assaël’s interest in science and the practical application of obsolete or forgotten scientific theories has led her to the actual collaboration with a physics research institute in Moscow, where the project for the Kunsthalle was developed. The installation consists of a customised power generator, electric wiring and copper panels suspended in the space above the visitors. With this equipment the 200 m2 room of the Kunsthalle will be transformed into a gigantic “Chizhevsky-Chandelier“. This technical hardware changes air particles into anions (electric negative charged atoms), building up a weak electrostatic tension inside the space. As a result the visitors will receive an electrostatic charge upon entering the space. The discharge will occur when touching an object or person oppositely charged. This physical phenomenon is known to us from everyday life, when we feel a small electric spark when we touch other people or objects such as e.g. a car door. The installation confronts the viewer with the immateriality of electricity, as a natural and at the same time mysterious energy that is fascinating but at the same time also contains danger.

In conjunction to the exhibition a catalogue will be published with texts by Adam Szymczyk, Esther Coen, Michael Michailovich Pashin and the artist. The catalogue mainly focuses on the actual work, Chizhevsky Lessons, and contains a detailed documentation about the piece.

Micol Assaël was born in Rome in 1979. She lives and works in Moscow and Rome. In recent years Assaël participated in important international group shows, such as the 4th berlin biennal in 2006, the Venice Biennal in 2005 and 2003, and the Manifesta 5 in San Sebastian, Spain in 2004. Currently the artist is taking part, among others, in the group show Schmerz at the Hamburger Bahnhof, Berlin.

Kunsthalle Basel will present the first retrospective exhibition of works by Bas Jan Ader in Switzerland, featuring all the key films, photographs, installations and publications produced by Ader before his untimely death in 1975.
Bas Jan Ader was born in Winschoten, The Netherlands in 1942. He moved to California in 1963, where he lived and worked until his mysterious and now mythologized disappearance whilst attempting to cross the Atlantic in a small boat.