Ablutions of a nefarious nature: retrospective exhibition of costumes, photos and video of the performance artist Johanna Went. At the heart of the work is an exploration of ancient, collective, symbolism. The Powder Room: on view works belonging to a varierty of media and genres from artists who believe that art is best judged by its ability to make your hair stand on end. The works selected follow neither a thesis nor a theme. A projection room for viewing artists' films and videos is included. 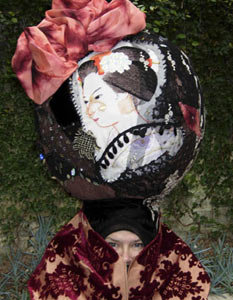 Track 16 Gallery is pleased to present seminal performance artist Johanna Went's Ablutions of a nefarious nature, a retrospective exhibition of costumes, photos and video, including three evenings of performance written an directed by Went. The exhibition runs from April 21, 2007 through May 19, with performances on Saturdays, May 5, 12, and 19 at 8 PM. The opening reception will take place on Saturday, April 21 from 6 to 9 PM.

Notorious for her blood and gut spilling work in Punk Rock clubs in the early 80's, Johanna Went continues to meet her audiences head-on with de-constructed characters, abstract costumes and a guided tour through a storm of bizarre imagery. In this piece, Ablutions of a nefarious nature, the main characterarrives at a remote location and becomes immersed in catastrophic events leaving her unsure if she is dead or alive. Like Persephone's journeys from world to underworld, this character travels from the banks of a material based reality to the shores of an intuitive existence, wading through the river of her unconscious.

At the heart of this work is an exploration of ancient, collective, symbolism. Went's mysterious visions are often simultaneously comedic and horrific. A vast array of costumes representing fabulous creatures, and archetypical monsters, perform strange ceremonies and rituals. Went and her crew move to the music in odd directions, foul the stage with a collection of weird props, peculiar trash, unstructured concepts, and psycho noise, while at the same time giving meaning and form to both the light and dark sides of life.

Wenthas performed at music venues and art spaces in the U.S. and Europe, most notably LACE (Los Angeles) COCA (Seattle) UCLA Schoenberg Hall (Los Angeles) The Shaffy Theater (Amsterdam) The Magic Theater (San Francisco), The Contemporary Arts Forum (Santa Barbara) and in New York at Franklin Furnace, Alice Tulley Hall at Lincoln Center as part of the Serious Fun Festival, and The Kitchen. Her work has been reviewed in the Slash magazine, Los Angeles times, the Village Voice, the L.A. Weekly, and was featured in the Industrial Culture issue of ReSearch magazine. USC Professor Meiling Cheng included Went in her book, The Other Los Angeleses, which documented the Los Angeles performance scene. A portion of one of her performances was a featured in Cathy Opie's film about performance artist Ron Athey, entitled Hallelujah. In addition to performance work, she has appeared in films, done vocal recordings, and has exhibited her artwork.

Reservations are required to attend the performances, and admission price is $18.00. Please call the gallery to reserve at 310.264.4678. Seating is limited.

Track 16 Gallery and The Godfrey Daniels School of Charm salute MOCA L.A.'s retrospective of feminist pioneers, Wack!, with an act of rebellion entitled: The Powder Room, referencing both a lady's toilette, and the place in forts where gunpowder was stored. Curated by Georganne Deen and Christine Wertheim, The Powder Room will be on view from April 21 through May 19, 2007, with an opening reception on Saturday, April 21 from 6 to 9 P.M. Regular gallery hours are Tuesday through Saturday from 11 to 6 P.M.

As a compliment to their creative sisters in WACK!, the curators of The Powder Room honor today's pioneers with a breakaway exhibition of artists who believe that art doesn't need to be anything other than a testimony, and is best judged by its ability to make your hair stand on end. The works selected follow neither a thesis nor a theme. Rather, the exhibition focuses on unruly women (and a few men), whose unique work is easily recognized by its methodology and/or style.

The exhibition includes work in a variety of media and genres from a wide range of artists, both established and emerging. It will also include a projection room for viewing artists' films and videos. In conjunction with the exhibition, a gala evening of live performances and video projections will be announced at a later date. (For details, please visit our web site).

Georganne Deen is an artist, poet, musician and principal of The Godfrey Daniels School of Charm. Christine Wertheim is a poet and a lecturer in the fields of writing and feminist studies at Cal Arts. An exhibition catalogue will be available for purchase.