The Greek-born artist, also known as a musician under the pseudonym Gavouna, demonstrates the versatility of a practice combining several media and formats. His sculptures and installations are based on musical pieces that he's written. On view also musical installations originated from invented Folk songs that make use of ancient cyclical canons. 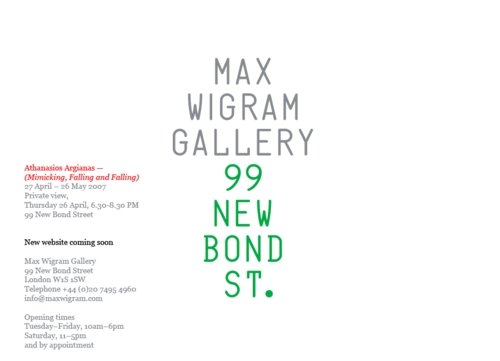 Max Wigram Gallery is pleased to announce the first solo show in the UK by Greek-born artist Athanasios Argianas. The artist graduated from the MA Fine Arts at Goldsmiths College in 2005 and will also present a concomitant exhibition at Cell Project Space (London), opening Friday 27th April 2007.

Also known as a musician under the pseudonym Gavouna, Argianas demonstrates the versatility of a practice combining several media and formats. His sculptures and installations are based on musical pieces that he’s written. Compositions consist of whistling quartets whose ethereal and formalist character mimic proto-Modernist synthesizers like the 1930s Theremin that was controlled by way of antennas rather than physical contact. This was one of the first electronic musical instruments which, much in the spirit of its time, carry a wealth of utopian ideas about the future of music. Argianas’ musical installations also originate from invented Folk songs that make use of ancient cyclical canons. His music is visually translated into simple constructions informed by a sense of directionality. These formal models attempt to humanise Modernist cultural tropes – namely the abstract Constructivism of Naum Gabo and Moholy-Nahy, avant-garde literature and the esoteric understanding of technology of the time - through the mediation of Folk Art’s endlessly repeated forms.

In this exhibition, the display structure Il pleut separates the works in the main gallery space. It is inspired by Apollinaire's poem Il Pleut (1918) where words were arranged like raindrops. Here copies of the poem have been shredded into strips which are then hung and rearranged on the structure/fence. Alongside Il Pleut, Lyrical Machine is a proposal for three poems read by three voices where fine strings alternate clockwise between reading lines from the centre outwards. Argianas’ works (or elements of) reference each other formally and in their content, thus becoming part of a generative system, and are shaped by directional movement as it can be seen in his “Braid paintings”, gouaches arranged in specific patterns that depict cyclical, looped braid designs based on found imagery. In the back space of the gallery, the musical installation Music For Four Imagined Theremins pt 2 (Mimicking, Falling and Falling) is an assemblage of a sound piece - a whistling quartet audible on a Perspex record on a turntable - and a series of models sitting on a platform which the acoustic distortions caused by the transcription to the Perspex record transform into almost electric sounds.

Argianas (b. 1976, Athens, Greece) lives and works in London. He graduated from the MA Fine Art, Goldsmiths Col lege in 2005. He is currently exhibiting this year in Pale Carnage (group) at Arnolf ini, Bristol (touring to Dundee Contemporary Arts) and at The Breeder (solo), Athens. Recent exhibitions include the project space, Vienna Kunsthal le (Austria), the 2006 Liverpool Biennial (as part of Bloomberg New Contemporaries) and the 2003 Prague Biennial (Czech Republic).