Shorelines. Influenced stylistically by photographers before him, such as Michael Kenna and Hiroshi Sugimoto, the artist purposefully photographs in poor light and near darkness. He uses unusually long exposures to see that which our eyes can not. 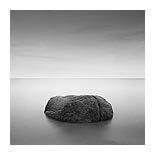 Born in Winnipeg (1968), Manitoba Canada, David Burdeny has degrees in both Interior design and a Masters in Architecture. At the age of 12, David started to photograph the prairie landscape and make his own black and white prints in a makeshift darkroom that also served as his bedroom closet. Primarily self taught, his architecture and design background greatly influences his penchant for simple exacting photographs of sky, horizon and the marks humankind leaves behind. Influenced stylistically by photographers before him, such as Michael Kenna and Hiroshi Sugimoto, David purposefully photographs in poor light and near darkness. He uses unusually long exposures to see that which our eyes can not. Moving beyond the literal, his images have been described as ominous, haunting, beautiful and meditative.

In addition to working as an artist, David is owned by two dogs and practices architecture design Vancouver, British Columbia Canada. His images have been shown across Canada and the USA and are featured in several prominent corporate collections such as Sprint and many private collections across the USA, Canada, Asia and Europe.

Made along the shorelines of Japan, Northern France, and the Pacific Northwest this recent body of work thematically continues my interest in the thresholds that divide and connect the sea to land. Through these journeys I attempt to communicate a universality or homogeneity in these disparate locations.

Embedded between the natural and domestic, these landscapes are often found at the periphery of parking lots, highways, urban parks, and public beaches. Each day these spaces are made and unmade and I am drawn to them for the weightlessness that lingers after activity ceases.

I'm fascinated with the quality of light and the spatial immensity the ocean possesses. I have an enormous reverence for feeling so small in the presence of something so vast, where perspective, scale, time and distance momentarily become intangible. My photographs contemplate that condition, and through their reductiveness, suggest a formalized landscape we rarely see. The glory lies not in the act of this removal or reduction, but in the experience of what is left - sublime experience located in ordinary space: a slowly moving sky, the sun moving across a boulders surface or seafoam swirling around a pylon.

Exposed onto large format black and white film under the soft light of dusk and dawn, the shutter is held open for several minutes at a time, recording the ocean and sky as it continuously repositions itself on the negative, a process both dependent and vulnerable to chance. The resultant image is an accretion of past and present. Each moment is layered over the moment immediately preceding it - a single image that embodies the weight of cumulative time and unending metamorphosis.