Sweet Safari or How We Desire the Wild 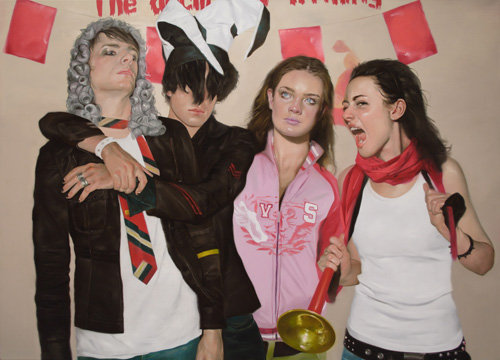 Sweet Safari or How We Desire the Wild

Lyons Wier - Ortt, NYC and Hilger Contemporary, Vienna are pleased to announce the first New York solo exhibition for the collaborative painting team of Daryoush Asgar and Elisabeth Gabriel - Sweet Safari or How We Desire the Wild.

Asgar / Gabriel’s works depict what they call “the historization of the moment” with references to baroque and 19th century paintings. They see their protagonists as portraits of a generation following the imperative “you can be anything you want”, a generation of ideological homelessness unabashedly pursuing a new myth moving between ecstasy and nightmare.

Painting itself is the last step in their long creative process. Asgar / Gabriel begin with a photographic sketch. Each sketch consists of hundreds of compiled photographs borrowed from mass media, their private photo album and then recomposed and modified on the computer. Like a contemporary Frankenstein, each of the subjects and compositions are reconstituted time capsules and commentaries on modernity’s obsession with notions of the “ideal” calling awareness to the global patronage of this obsessively unattainable modality set forth and so pervasive in popular culture.

Daryoush Asgar was born in Tehran 1975. In 1985, during the Iran-Iraq war, his family immigrated to Austria. 1996-2000 he studied at the Academy of Fine Arts, Vienna. He exhibited in Austria, Germany, Italy and Canada and won the Austrian Strabag Art Award in 2002.

Elisabeth Gabriel was born in Vienna 1975. 1988-90 she studied piano at the Academy of Music and Performing Arts. 1994-2000 she studied philosophy and literature at the University of Vienna. She did her thesis on the Aesthetic Theory of Theodora W. Adorno. After graduation she worked at the theatre in Vienna, Berlin and Bern (Switzerland).

Asgar / Gabriel work and live in a studio in the heart of Vienna. They began their relationship musically in the 1990s playing in a garage rock-band. In 2002, they moved to Berlin where they started their painting collaborations and stayed for 3 years. Their first collaborative painting Entering Barbarians was exhibited in Vienna, 2005.