For this exhibition, the artist engages in a symbolic retelling of a tahitian legend through the construction of an ambitious sculptural installation. 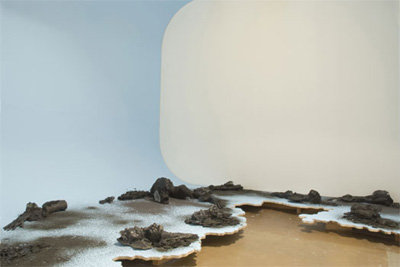 The Departure of the Fish: Redux

The Departure of the Fish: Redux takes its name from a creation myth of Alexander Lee's native Tahiti. The legend tells of a volcanic island that was transformed into a fish and swam to the mythological place of Havai'i, where it turned once again into land and formed the Tahitian islands. For this exhibition, Lee engages in a symbolic retelling of these events through the construction of an ambitious sculptural installation.

Central to the artist's narrative is a two-headed chimera character cast entirely out of resin and gleaming black Tahitian sand. This, along with myriad other fish, eel, and coral covered human limbs, is staged upon a set of sleek wooden platforms cut into wave like patterns and painted pale blue. Collectively, they transform the gallery space into a vast underwater reliquary, a series of unsettling artifacts that serve to illuminate Lee's investigation into the stories and traditions of his past. At the same time, this fragmented imagery- severed legs, heaps of lifeless fish- provides a visceral and arresting allusion to contemporary tragedies like 9/11 and the 2004 Indian Ocean tsunami. As such, Lee's interest in what he calls "a re-visitation of communal catastrophe and of trauma as spectacle," merges history and myth to blur the boundaries between life, death, decay and re-birth.

Alexander Lee's work was recently featured in a solo exhibition at Kinkead Contemporary in Los Angeles, and has been included in many group show across the United States and in Europe. He received his MFA from Columbia University and an MPS from the Interactive Telecommunications Program at New York University. This is his first solo exhibition in New York.

This exhibition was organized in cooperation with Scenic.