Vier Skulpturen. The visitor to the gallery is acoustically drawn into the main room by the motors of the ventilator fans and then stops at the aluminium cover of the sculpture Runder Raum. In another room eight red signal flags are hanging from a wooden rod, and flattering in the wind produced by eight fans. 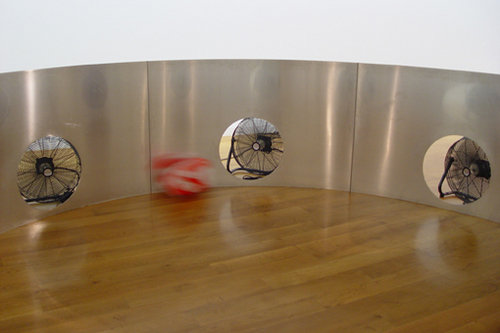 For many years, Roman Signer has defined his own independent and established position as a sculptor within the international art scene, and has influenced following generations of artists. His works are unmistakable, with their fundamental and consistent attempt to position objects of everyday use -- and within the framework of his performances, the artist himself -- in states subject to simple physical processes and laws. Signer does this with existential intensity, combining the artificial with the natural.

The moving sculptures that Roman Signer puts together sometimes occupy whole rooms and sometimes appear as just fleeting ideas in images, but are all full of potential tension and subject to the same im-mutable conditions. The object requires physical force so as to become a moving sculpture, and the sensual experience of natural phenomena like the wind, gravity or smoke only becomes visible through their effect on the object. By means of this synthesis, which is also always a process of mutual influence, Roman Signer produces surprising images and experience.

Roman Signer very precisely calculates his staging and ordering of the moving objects and installations, experimenting and rehearsing again and again, so that the chance of failure and possible acci-dent is reduced to nearly zero. But not quite zero, for the observer watches these staged events with a sense of the improbability of their success holding out, and feels astonishment, apprehension, and pleasure.

The four sculptures and the photo series by Roman Signer in Galerie Barbara Weiss invite us to enter and experience this tense environment. The visitor to the gallery is acoustically drawn into the main room by the motors of the ventilator fans and then stops at the aluminium cover of the sculpture /Runder Raum (Round Space)/. Will the spinning and gyrating red plastic bag in this ring of fans continue to go round in circles, or might it perhaps fly out into the gallery? This disconcerting poetic idea and image is then relativised by the noticeable and powerful energy of the artificial wind -- looking more closely at the fragile plastic bag shows that it never loses contact with the metal inner wall of the ring. Near /Run-der Raum/, another work, /Tabakpfeife (Tobacco Pipe)/, can be seen on a wooden plinth. At first sight it looks like an autonomous object. Looking more closely at the black hosepipe that attaches the mouth-piece of the pipe to a red gas bottle, a spectacular effect becomes apparent. If you press the lever on the gas bottle, then the pipe emits liquid carbonic acid that hisses as it turns into a column of white smoke.

If you wanted to set a metal barrel rolling, then you might go about it with simple childish curiosity, and just put it at the top of a slope and push it down. But Roman Signer uses a blue barrel manufactured to hold liquid chemicals, and two fans to blow it between two walls of the second room of this exhibition. In the third room eight red signal flags are hanging from a wooden rod, and flattering in the wind produced by eight fans. The flags move in a set pattern, alternating to the right and the left. This alternating pattern has the effect of a moving ornament that offers a sophisticated artistic idea as a counter to the laws of the wind. The two photo series /Bürostuhl (Office Chair)/ and /Floß (Raft)/ show sequences from two of Roman Signer's actions. Seated on an office chair, Roman Signer is seen holding rockets that would provide the necessary thrust to rotate him and his chair. In Floß an Italian piaggio scooter is floated downstream by two ferrymen in traditional dress. The piaggio on the ferry enters the hilly landscape of Poland.
Birgit Szepanski