Three Hundred Years of Innovation - Now. The exhibition, organized by the Solomon R. Guggenheim Foundation, reflects the entire history of art in the United States and presents approximately 160 works by nearly as many artists who hold an important place in America's art history, and systematically outlines the developments of the last 300 years, from the colonial period of the 18th century to the present. Among the artists: Jackson Pollock, Mark Rothko, Robert Motherwell, Robert Rauschenberg, Roy Lichtenstein, Donald Judd, Dan Flavin, Brice Marden, Matthew Barney, Paul Chan, Felix Gonzalez-Torres, David Hammons and amny others. 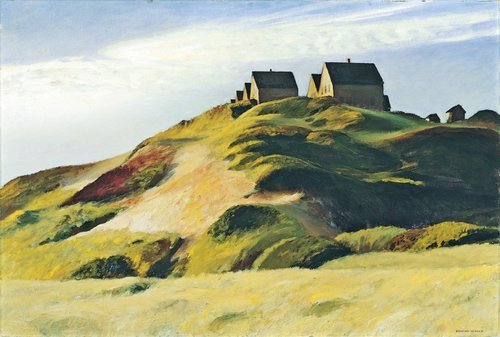 Art in America: Three Hundred Years of Innovation, the largest and most comprehensive exhibition of American art to come to China and the first to fully reflect the entire history of art in the United States—will be on view at the Shanghai Museum and the Shanghai Museum of Contemporary Art (MoCA) from May 1, 2007, through June 30, 2007. The exhibition, which premiered in Beijing at the National Art Museum of China from February 10 to April 5, 2007, was organized by the Solomon R. Guggenheim Foundation, New York, and the Terra Foundation for American Art, Chicago. Drawn from several dozen museums and collections in Europe and America, the exhibition presents approximately 160 works by nearly as many artists who hold an important place in America’s art history, and systematically outlines the developments of the last 300 years, from the colonial period of the 18th century to the present. For the Shanghai presentation, a new contemporary section has been added to the exhibition—Art in America: Now—which will be mounted at MoCA. Following its presentation in Shanghai, the exhibition will travel to Moscow to commemorate the 200th anniversary of the start of diplomatic relations between Russia and the U.S., and to Bilbao, as part of the Guggenheim Museum Bilbao’s tenth anniversary celebrations.

“Art in America provides a critical opportunity for us to encounter and understand American culture,” said Chen Xiejun, Director, Shanghai Museum. “We have devoted all three special exhibition halls to Art in America: Three Hundred Years of Innovation, which will be surrounded by some of the greatest works from five thousand years of fascinating and wide-ranging Chinese civilization. The old, the new, China, and America will thus be brought together in a fortuitous intersection of time and space.”

“MoCA Shanghai is committed to bringing high-quality international contemporary art to China, encouraging a global cultural exchange and dialogue amongst the public. Thus we present the Guggenheim exhibition, Art in America: Now,” explained Samuel Kung, Director, MoCA Shanghai. “An exhibition of this caliber not only stands as a model of reference for the contextual background of American art; it also nurtures the public’s appreciation of contemporary art, thus inspiring creativity amongst Shanghai’s local and international communities.”

“Art in America: Three Hundred Years of Innovation was a triumphant success in Beijing, and we are extremely pleased to partner with the Shanghai Museum and the Shanghai Museum of Contemporary Art to bring the exhibition to an even wider public,” said Thomas Krens, Director of the Solomon R. Guggenheim Foundation. “The Guggenheim’s commitment to China has been central to its identity and strategy as a global cultural institution. As the first comprehensive historical survey of American art ever presented in China, Art in America promises to increase understanding of American history and culture among the Chinese public, and hopefully can be an inspirational threshold for greater dialogue between the peoples and cultures of America and China.”

“An international lens informs all that we do at the Terra Foundation,” said Elizabeth Glassman, President and CEO, Terra Foundation for American Art. “In the largest sense, our goal for Art in America is to expand and enrich knowledge of American art among Chinese audiences. By revealing the complexities of our nation’s history and artistic heritage, we seek to distinguish our own culture while simultaneously forging new and enduring connections with the Chinese. We are pleased to partner with the Solomon R. Guggenheim Foundation in this historic exhibition and extend our thanks to all the lenders for sharing their treasurers with the world.”

“Alcoa Foundation is pleased to support another important Guggenheim cultural exchange, Art in America: Three Hundred Years of Innovation, and we look forward to sharing these rich representations of the American experience with the Chinese people, particularly the opportunity to bring this history to a variety of regional audiences through the educational program,” said Alain Belda, Chairman and CEO of Alcoa. “We congratulate the Guggenheim for assembling this impressive set of works.”

“It was in 1998 that the Guggenheim first approached the Henry Luce Foundation with the exciting idea for the exhibition and catalogue Art in America,” said the foundation’s president, Michael Gilligan. “Given our longstanding commitment to promoting better understanding between America and China and to bringing the work of American artists to more widespread attention, this is a natural fit. We are honored to assist in this important undertaking to bring 300 years of American art to China, and we look forward to sharing this artistic heritage with the Chinese people, who have long shared theirs with us.”

Publications
A fully illustrated color catalogue published in both English and Chinese accompanies the exhibition. Michael Leja contributed a main essay outlining the major movements in American art from the Colonial period to the present. Additionally, each section contains an overview essay written by a leading scholar of the period. Margaretta M. Lovell contributed a text on early American portraiture; David M. Lubin wrote on 19th-century art and material culture; Nancy Mowll Mathews examined Americans abroad and at home; Justin Wolff investigated the impact of industrialization on American art; Robert Rosenblum explored America’s rise as a world art power in the postwar period; and Susan Cross commented on the issues of American art in a global context. Shorter essays on relevant thematic topics are also included: Patricia Johnston and Jessica Lanier explored Chinese influences on early American visual culture; Anthony Lee contributed an essay on Chinese-American artists and the Chinese Diaspora in the United States; and Elizabeth Kennedy addressed the myth of the American cowboy. A second publication for the Art in America: Now presentation at MoCA includes a text by Helen Hsu, Curatorial Assistant, Solomon R. Guggenheim Museum, and nearly thirty new artworks that have been drawn from the Guggenheim and private collections for the expanded contemporary art exhibition.

Education Program
The educational program development for Art in America: Three Hundred Years of Innovation has involved a dynamic cross-cultural exchange between the Guggenheim education staff and their curatorial and education colleagues at the museums in China. The exchange focused on learning about the educational philosophies and audience development approaches employed by each institution and has resulted in the co-development of exhibition-related public programs relevant to the regional audiences of the host venues as well as new collaborative strategies between host venues. Several working sessions in three cities, New York, Beijing and Shanghai, have ensured that interpretive materials, educational activities, and cross-institutional marketing prepared for this exhibition would best serve Chinese audiences and reflect a true exchange between Asian and Western museological cultures.

The Solomon R. Guggenheim Museum, the Terra Foundation for American Art, and the National Art Museum of China intend to sustain the impact of the exhibition through a library exchange program. Both Beijing and Shanghai venues will incorporate docent training by the curatorial team. On May 2, the Shanghai Museum and Shanghai MOCA will offer public tours by the exhibition curators. On May 10, the Shanghai Museum will host two public lectures by noted American scholars and catalogue essayists. Michael Leja will speak on “From Colonialism to Modernism” and David Lubin will speak on “Art, War and Propaganda.”

A full-color brochure with an annotated timeline of U.S. history accompanies the exhibition at the National Art Museum of China and Shanghai MoCA and is available to museum visitors free of charge.

Since 1996, when the Solomon R. Guggenheim Foundation collection was shown at the Shanghai Museum as one of the first exhibitions of modern Western art in China, the Guggenheim’s commitment to China has been central to its identity and strategy as a global cultural institution. In 1998, the Guggenheim presented China: 5000 Years, an unprecedented masterpiece survey of Chinese art, archeology, and culture from ancient to modern periods, drawn from China’s major museums and organized in cooperation with the P.R.C. Ministry of Culture. Recently, the museum established a curatorial position for Asian art, the first within a modern and contemporary art museum in the west. In 2008, the Guggenheim Museum will present the first museum retrospective of the work of contemporary Chinese artist Cai Guo-Qiang.

Terra Foundation for American Art
The Terra Foundation for American Art is committed to fostering innovative projects that emphasize multinational perspectives and participation. Throughout its 27-year history, the Terra Foundation has supported exhibitions, scholarship, and educational programs designed to engage individuals around the globe in an enriched and enriching dialogue on American art. The Terra Foundation’s collection of American art spans the colonial era through 1945, and includes more than seven hundred works. Currently, the Terra Foundation operates the Musée d’Art Américain Giverny; actively lends works in its collection to national and international exhibitions that advance American art scholarship; awards grants to exhibitions and programs that explore American art in Europe, Canada, Latin America, and now, Asia; and supports scholars through residential fellowships at the Smithsonian American Art Museum, as well as through travel grants offered through the Courtauld Institute of Art in London, the John-F.-Kennedy-Institut für Nordamerikastudien in Berlin, and l’Institut national d’histoire de l’art in Paris.