For this exhibition, Rhode combines elements of performance, photography, film, drawing, and sculpture. The artist consistently employs a wide variety of media to draw upon the sub-cultural codes of hip-hop, popular sports, film, and fashion. 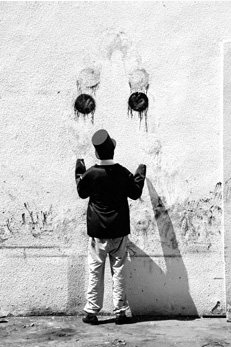 Perry Rubenstein Gallery is pleased to present an extensive exhibition of new work by Robin Rhode in all three of the gallery's spaces. Primarily known for his performance-based works, animations and photographic series, Rhode consistently employs a wide variety of media to draw upon the sub-cultural codes of hip-hop, popular sports, film, and fashion.

For this exhibition, Rhode combines elements of performance, photography, film, drawing, and sculpture in a unique expansion of his inimitable artistic vocabulary, further proving his unique ability to create narratives with the most basic and accessible materials. Here, Rhode will present four new photographic works that advance key thematic elements such as racism an identity. Particularly unique to this exhibition, Rhode investigates the variable presentation of his photographs, culminating with the unique sculptural installation Table of Contents.

Along with these photographic works, Rhode introduces new fully three-dimensional sculpture and a 16 mm film, both new media for the artist. Candle, Rhode's first time working in 16mm, marks a departure from his earlier low-fi digital animations. The graininess and delicacy of the film stock are integral; projected without added sound, the ambient noise of the projector's looping will be highlighted. The palpable texture of Candle contrasts with the quiet action of the film, illustrating Rhode's striking illusion of controlling a candle flame.

Rhode's sculptures are constructed with everyday materials that reference South African products and objects that have particular personal and social resonance from his native country. A brick taken from his backyard in Johannesburg has been replicated in chalk and will be used to create his signature wall-drawings. Carling beer bottles, a beer particularly significant to the South African anti-apartheid movement, are replicated in blown glass. Rhode has elongated the bottlenecks to reach upwards of six feet--they seem to grow like a garden from their original shipping crate. The extended forms of the bottles mimic the gestural lines of Rhode's drawings, pulling the viewer into this three-dimensional narrative vision.

The 526 West 24th Street space is transformed into a theater showcasing Rhode's Storyteller (2005), a video work that marks a pivotal point in his practice and a segway for the recent work in the exhibition. Created in Rheims, France in collaboration with the professional dancer Jean-Baptiste Andre and set to the music of violin/cellist Didier Petit, Storyteller's protagonist (Andre) interacts with a wall drawing that evolves throughout the duration of the piece: a tree and its branches slowly transform to become a complex network of 'strings', responding to the strums of the soundtrack's cello. The dance evokes the movements of a falling leaf and tree, the dancer acting as musician with the tree as his instrument, wistfully playing its branches like a cello.