Three solo show: Marc Bijl, Beagles and Ramsay and Joe Walsh. In most of the works exhibited, the artists appear as actors or performers in their own work and the concept of self-broadcast as typified by the web site YouTube is a prevalent strategy. 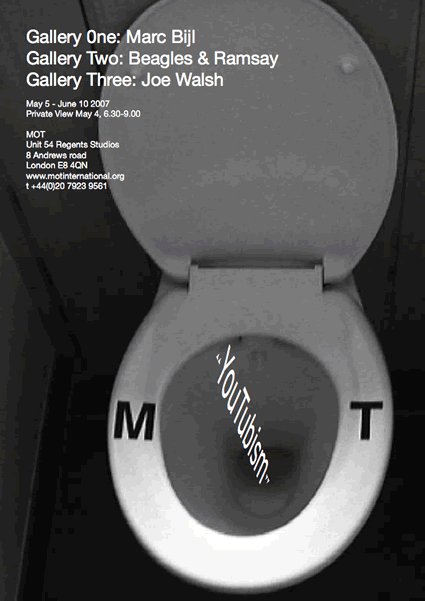 MOT divides itself into three galleries in order to present three miniature solo exhibitions by Marc Bijl, Beagles & Ramsay and Joe Walsh. When asked to title his part of the exhibition Marc Bijl came up with “YouTubism” which ironically would have been a great title for a group show of these three artists. In most of the works exhibited, the artists appear as actors or performers in their own work and the concept of self-broadcast as typified by the web site YouTube is a prevalent strategy, so MOT has decided to appropriate this title as a bridge between each exhibition, how you cross it is left up to you.

John Beagles and Graham Ramsay have collaborated since 1997 and are best known for their exploration of the self portrait genre, utilising everything from blow up dolls to their own blood, they have found numerous ways in which to portray themselves. In their latest work, to be shown at MOT, Beagles and Ramsay present a series of photographic prints featuring ghostlike fop characters trapped within a void-like scenario. With white wigs and their faces covered with pancake makeup, replete with Pompadour beauty spots on their cheeks, the artists appear incapacitated within a desert of gold glitter. Beagles & Ramsay live and work in Glasgow, Scotland. Recent exhibitions include, ‘What makes you and I different?’ at the Tramway Gallery, Glasgow (2006), ‘When Humour Becomes Painful’ Migros Museum Zurich (2005), Romantic Detachment, P.S.1. New York (2004), ‘Dead of Night’ Gasworks Gallery (2003) and ‘Zenomap’ Scottish pavilion, Venice Biennale (2003).

Joe Walsh is the first artist to show in MOT’s Backroom project space. Behind the green curtain in what was our old office, but now acts as storage room, we will screen his most recent video work ‘The Work Ahead of Us’, 2006, in which Walsh re-appropriates a scene from Kubrick’s ‘The Shining’. Walsh replaces the protagonist Johnny, who is struggling to write a play, with a Chinese man who is preparing food. As he works, another character rises from a plasterboard mountain landscape. Their routines are taken from characters from eastern Cinema; the vegetable chopper invariably sticks to his task, while the other Ninja character attempts to intervene and distract the vegetable chopper. This interaction builds into a track of amplified background sound with vegetable chopping and prawn crackers being eaten. Walsh Graduated from Goldsmiths in 2002 and has exhibited in Metropolis Rise: New Art from London, 798 Space, Beijing and CQL Design Centre, Shanghai, Art and Film, Casa Voyegeur, Casablanca, SV05 Selected by Enrico David and Catherine Wood, Studio Voltaire, London and with Chris Cornish at Rachmaninoff’s, London