Special exhibitions and a prize. From straightforward photojournalism to intimate social photography, from exploration of cultural and local complexities to documentations of contemporary history. The nominees are: Philippe Chancel, Anders Petersen, Fiona Tan and Walid Raad. Organised by The Photographers Gallery. 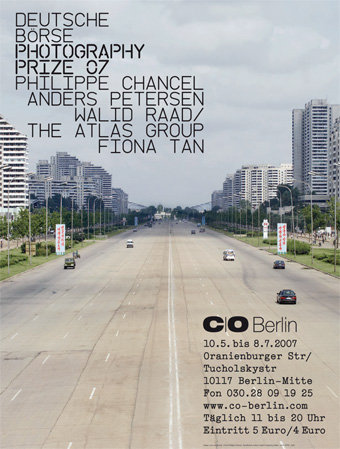 From straightforward photojournalism to intimate social photography, from exploration of cultural and local complexities to documentations of contemporary history: Philippe Chancel (France), Anders Petersen (Sweden), Walid Raad/The Atlas Group (Lebanon) and Fiona Tan (Indonesia), the shortlisted nominees of the Deutsche Börse Photography Prize 2007, impress through very different works. While Philippe Chancel captures the all-encompassing aesthetic of communist ideology in North Korea as well as the finly orchestrated details of daily propaganda, Anders Petersen turns his camera to the hidden aspects of human nature on the fringes of society. In his project “The Atlas Group” Walid Raad reflects on how to document the history of contemporary Lebanon. Fiona Tan explores the impact of cultural and social complexities on individual identities. Thus the Deutsche Börse Photography Prize, one of the most important prizes for contemporary photography, presents again a broad spectrum of themes and styles.

In March 2007, Walid Raad was presented with the
award, worth £30,000, for his project he founded, entitled “The Atlas Group”, through which he investigated the documentation of contemporary history in war-torn Lebanon over a fifteen-year period between 1989 and 2004. His “Documents” are based on personal memories and simultaneously refer to cultural fantasies rected from the material of collective memories.

Puberty is a limbo – a state of physical and emotional transition, an uncertain place between melancholy and hope, fear of loss and excitement about the new, surrendering one‘s identity and defining oneself anew. Hellen van Meene‘s portraits of adolescents are multi-layered visual metaphors for that in-between period during which childhood is being left behind. With carefully-staged poses taken in soft light with gentle colouring, van Meene explores the boundary between the world of childish fantasy and adult life. The careful observation and intuitive understanding that these photographs display make them unique psychograms, and, with their technically-perfect realisation, photographic masterpieces.

Lounging casually against the car, chatting and hanging out with the gang, cigarettes, alcohol, hooded sweatshirts, sneakers and baseball caps, nighttime gas stations and bus stations on the fringes of modern cities – in Bristol, Halle-Neustadt, Marseille and Los Angeles, Tobias Zielony has documented the way young people stage their appearance in their environment and put their own youth culture on display.

Zielony is fascinated by the way the kids hang around and roam the streets at night, which he sees as a casual form of the social world. Darkness increases their isolation from the remainder of the settlement and from the people in the houses and apartments. At night, the kids are the only people occupying public space. Here, they are alone, and darkness is both protection and secrecy. By standing around in public spaces they demonstrate their rejection of the world of adults. Zielony, however, does not see these young people as the victims of political or social problems, but as subjects acting independently.

A catalogue has been published to accompany the exhibition, including a text by Jutta v. Zitzewitz. It is published at Deutscher Kunstbuchverag

In Cooperation with Designmai Berlin
Supported by Erfurt & Sohn KG