The exhibition brings together 3 artists, Stephanie Brooks, Helen Mirra, Ian Wilson, and one artist collective who use language as a means to reorient the traditional experience of viewing art. Thus language is a way to not only increase interpretive referents but also subvert hierarchical art historical categories and it becomes both a source of information and a foundation for an image. 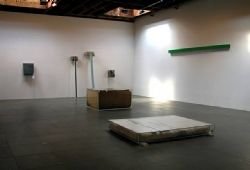 This exhibition brings together three artists, Stephanie Brooks, Helen Mirra, Ian Wilson, and one artist collective who use language as a means to reorient the traditional experience of viewing art. The works in this show incorporate language in analytic, self-referential manners. Language, in this context, becomes a way to not only increase interpretive referents but also subvert hierarchical art historical categories. It also enables language to be both a source of information and a foundation for an image.

Four important, rarely seen Art & Language pieces from the early 1970s will be on display. Index 003 (1972) relates to the Index 001 (1972) shown at Documenta V. Index 003 is composed of eighteen individual parts-spanning a distance of more than 20 feet-that reads as one image. It presents a schematized code of words and numbers that demonstrates Art & Language's continual concern with activating viewers into a heightened space of critical awareness. The seminal piece Chart (with Detail) (1972), exhibited at MoMA in 1976, presents a repetitive system of letters that take on the dualistic function of being linguistic and pictorial.

Chicago-based artist Stephanie Brooks will show pieces from the last several years. As with her earlier work, Brooks' engagement with key literary texts as well her interest in abstraction allows her to revisit the tradition of Minimal and Conceptual art through the admix filter of contemporary romanticism and a slightly detached sense of humor. For example, My Idealized Library of Feminism, consists of ten cherry wood blocks that replicate the shapes of feminist books important for Brooks. In The Bee Meeting (Plath) (etched zinc plates with enamel paint on a shelf), Brooks takes a poem by Plath and omits everything but the letter "e."

Helen Mirra inflects her nuanced manipulation of materials with a sensitivity to the context in which her works are made. A case in point are the stencils for her site-specific installation, Instance the determination, for the campus of the University of Chicago. Here, Mirra used these stencils to present her own indices of works by John Dewey and Jane Addams. They retain traces of her marking and thus become an index of her devised index. Mirra continues her subtle play with allusions and referentiality in the painting Belief, the; that life turns green, smiles, and bleeds, is first and last of all things, and this is connected to the development of buds, 126 which is based on the novel "Der Räuber" (The Robber) by the Swiss author Robert Walser.

The conceptual work of Ian Wilson focuses on his primary interest in oral communication. Wilson will show two recent works and a general statement from 1976. The newer pieces are made up of a set of ten and twenty books respectively, and are arranged vertically on a shelf. They contain a single word printed on the upper left hand corner of each page: perfect. The general statement (a small, framed sheet of paper) conveys the phrase: "there is a discussion." This work alludes to Wilson's belief that "any discussion, any oral communication, is an example of the object of my thought or the object that I am trying to communicate to you." In fact, in the past 40 years he has made the oral discussion the medium that defines his art.