Tha artist shows a large group photos and also pictures of individuals from his stay in Iceland last year. 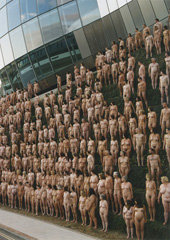 Spencer Tunick was born in 1967 and currently lives in New York. He has been documenting the live nude figure in public since 1992 and has created installations around the world in spectacular locations including Belgium, Australia, Canada, USA and Brazil, gathering thousands of people at one time. His temporary site-specific installations in the past have been commissioned by the Vienna Kunsthalle (1999), Institut Cultura, Barcelona (2003), XXV Biennial de Sao Paulo, Brazil (2002); The Saatchi Gallery 2003); MOCA Cleveland (2004) and BALTIC, Newcastle Gateshead, UK; UNAM Mexico City (2007), among others.

Creating temporary site-specific landscapes involving many nude figures arranged in public places, Tunick’s installations follow on the tradition of land art. Working directly in the landscape, the artist uses the nude body as raw material to intervene and transform a chosen site, documenting the installations with photography and video which he then exhibits in a gallery context.

Tunick’s work, poetic and challenging, questions the relationship between art and urban space. To settle the installations, a large number of bodies are undressed, set all together, until they form a new common shape. They take place in an environment as a new material, drawing a totally abstract form, out of all sexual connotation and sometimes nearly close to mineral. Referring to land art, Tunick’s work also underlines the difficulties one can find to exhibit everlasting or ephemeral art into public space. The poetic whole resulting from individual bodies arranged in a sculptural way in an urban setting, challenges traditionally held views on nudity and privacy as well as social and political issues surrounding art in the public sphere.

On first sight Tunick’s work generates a strong feeling of abolishment of any social, cultural, racial, economical and political difference. By mixing all backgrounds and origins of the bodies Tunick enhances the moment of the work, making it unique and collective. Showing bodies that no longer hide their sexuality raise the questions of how our contemporary society can question nudity, and how it receives it from nowadays medias : Tunick’s work isn’t about pornography nor voyeurism.

It is universal, out of all the contemporary disguises. Close to ecosophy it makes men closer to the essential in a relative modesty. The spontaneous way in which the participants take place in this collective « here and now » event can be seen as a way back to a certain number of values or questions such as ethic and its place in our post- modern life. Making the artist work with a given environment, enhancing our vision on nudity and intimacy, raising a reflexion on the way art can create a link between things and human being, social or cultural, here are some of the questions that emerge from Spencer Tunick’s work. Out of any aesthetic and pictorial sensation, or on confrontation of mankind toward Nature and social points, out of the gesture of creation and the artist’s role (being out of the group and its representation), Tunick’s work essentially questions our relationship to the world.