Art of the Psychedelic Era. The unprecedented explosion of contemporary art and popular culture brought about by the civil unrest and pervasive social change of the 1960s and early '70s: a new psychedelic aesthetic that emerged in art, music, film, architecture, graphic design, and fashion. The show includes paintings, photographs and sculptures by Isaac Abrams, Richard Avedon, Lynda Benglis, Richard Hamilton, Elliott Landy, Robert Indiana, Yayoi Kusama, Richard Lindner, and John McCracken, among others, as well as a rich selection of posters, album covers and underground magazines. 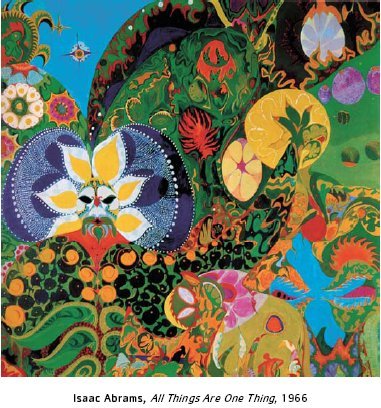 Art of the Psychedelic Era

The emergence and flowering of psychedelic art coincided with one of the most revolutionary and tumultuous periods of the twentieth century. Forty years after the legendary summer of 1967, the Whitney Museum of American Art revisits the period with Summer of Love: Art of the Psychedelic Era, an exhibition tracing the explosion of contemporary art and popular culture that was brought about by the civil unrest and pervasive social change of the 1960s and early 70s. Opening in May 2007, the exhibition celebrates a new psychedelic aesthetic that emerged in art, music, film, architecture, graphic design, and fashion. Curated by Christoph Grunenberg at Tate Liverpool and originally presented there, the show has toured to the Kunsthalle Schirn Frankfurt and the Kunsthalle Wien. The installation at the Whitney, which is the only showing of the exhibition in the United States, is being overseen by assistant curator Henriette Huldisch.

Psychedelic art, distinguished by its use of exuberant color, ornamental forms, and formally complex, obsessively detailed compositions, represented expanded or altered states of consciousness induced by music, light, meditation, and hallucinogenic drugs. In recent years, art of the psychedelic era has experienced an unprecedented revival and captured again the imaginations of contemporary artists, designers, and filmmakers. Summer of Love reconstructs the original creative impulse and utopian ambitions of psychedelia and locates it within the wider cultural and political context of counterculture and the civil rights movement, the Cold War and the Vietnam War. The exhibition demonstrates how the psychedelic aesthetic permeated many aspects of popular culture and how artists, immersed in countercultural activity, fluidly crossed the boundaries between disciplines, genres, and media.

Summer of Love features paintings, photographs and sculptures by Isaac Abrams, Richard Avedon, Lynda Benglis, Richard Hamilton, Jimi Hendrix, Robert Indiana, Yayoi Kusama, Elliott Landy, Richard Lindner, John McCracken, and Andy Warhol, among others, as well as a rich selection of important posters, album covers and underground magazines. A special emphasis is placed on film, video, and multimedia environments, replicating the immersive experience of psychedelic light shows and performances, and including works by Jordan Belson, Stan VanDerBeek, James Whitney, and Lamonte Young and Marian Zazeela. Also shown are a multiple projection installation of the Boyle Family’s films, first used in light shows for the psychedelic band The Soft Machine, and a liquid crystal projection by Gustav Metzger. Major environments include Mati Klarwein’s New Aleph Sanctuary 1963-71, which brings together many of his motifs (which he also used in his designs for Santana album covers) in a spectacular installation, and Vernon Panton’s brightly-colored crawl-in furniture landscape.

The art in the exhibition is contextualized through a wealth of documentary material, highlighting events, people and places in three centers of countercultural activity: San Francisco, New York, and London. The sections include photographs, films of protests and concerts, light shows, as well as events at places such as the UFO nightclub in London, the Fillmore Auditorium in San Francisco, and the Human Be-In in that city's Golden Gate Park, featuring Allen Ginsberg and Timothy Leary. The underground press, emerging during the 1960s as an instrument of alternative communication and democratization, is represented through Oz magazine, International Times, East Village Other, and The San Francisco Oracle, along with many other publications and documents. Providing a vivid picture of a period in fundamental moral and political upheaval, they are also testament to an extraordinary burst of creativity that revolutionized the visual vocabulary of graphic design.

ISP Curatorial Exhibition:
The Price Of Everything... Perspectives On The Art Market
on view May 17, 2007-June 24, 2007
An exhibition organized by the 2006-07 Helena Rubinstein Curatorial Fellows of the Independent Study Program The show addresses the different overlapping micro-economies that comprise today’s expanded art market, structures that are often invisible to the casual observer. Taking its title from Oscar Wilde’s definition of the cynic as “a man who knows the price of everything but the value of nothing,” the show explores how artists have responded to the distinction between price and value, or to the erasure of that distinction. The featured works investigate the commercial aspects of exhibition and display, engage the concept of speculative value, or shed light on the role of the collector. Bringing together older and contemporary artworks, the exhibition reveals the playful side of works that seem grounded in explicit critique and locates critical subtexts in pieces that, at a first glance, might not appear to directly address market mechanisms.

Lincoln Kirstein
on view April 25, 2007 - August 27, 2007
The 100th anniversary of Lincoln Kirstein's birth is observed with an exhibition focusing on a trio of artists from his circle. Kirstein, a hugely influential force in American culture, engaged with many notable artistic and literary figures, and helped shape the way the arts developed in America from the late 1920s onward. His involvement with choreographer George Balanchine, with whom he founded the School of American Ballet and New York City Ballet, is perhaps his best known accomplishment. This exhibition focuses on the photographer Walker Evans, the sculptor Elie Nadelman, and the painter Pavel Tchelitchew, each of whom was important to Kirstein. Kirstein curated the first major Evans exhibition and wrote the introduction to Evans' book American Photographs (1938). He rescued the reputation of Elie Nadelman from relative obscurity and wrote monographs devoted to his sculpture and drawing. From Tchelitchew, Kirstein commissioned a portrait of himself that is one of the painter's greatest works; Kirstein collected his art and wrote about him extensively. Selections from Kirstein's writings will form the basis of the labels and wall texts. Curators: Elisabeth Sussman and Carter Foster, with guest curator Jerry L. Thompson

Matthew Brannon
on view March 28, 2007 - August 26, 2007
Whitney Museum of American Art at Altria
Matthew Brannon employs a signature combination of printed materials, design strategies, and text to create work inscribed with psychological content and critique. In various modes of production including letterpress prints, screenprints, and posters, Brannon constructs an indeterminate graphic identity that veils a pointed sensibility. For his first solo museum exhibition, Brannon expands this practice in an installation commissioned by the Museum that explores the complex relationship between art, design, ambition, and taste. Drawing on the graphic iconography of corporate, commuter, and New York cosmopolitan lifestyles, Where Were We presents letterpress and screenprint imagery ranging from men's toiletries to sushi dinners arranged as framed prints on a series of custom display structures designed by Brannon. Another, large-scale commissioned work is on display in the Sculpture Court windows.

Taryn Simon
on view March 9, 2007 - June 24, 2007
For this project, artist Taryn Simon (b. 1975) assumes the dual role of shrewd informant and collector of curiosities, compiling an inventory of what lies hidden and out-of-view within the borders of the United States. She examines a culture through careful documentation of diverse subjects from across the realms of science, government, medicine, entertainment, nature, security, and religion. Transforming the unknown into a seductive and intelligible form, Simon confronts the divide between those with and without the privilege of access. Her sometimes ethereal, sometimes foreboding compositions, shot with a large-format view camera whenever conditions allowed, vary as much as her subject matter, which ranges from radioactive capsules at a nuclear waste storage facility to a black bear in hibernation. Offering visions of the unseen, the photographs of An American Index capture the strange magic at the foundation of a national identity.

The Whitney Museum is located at 945 Madison Avenue, New York City.
Museum hours are: Wednesday, Thursday,
Saturday, and Sunday from 11 a.m. to 6 p.m., Friday from 1 p.m. to 9 p.m., closed Monday and Tuesday.