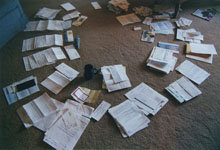 UC Berkeley's Master of Fine Arts graduates invite viewers to slow down, breathe deeply, and take their time at this exhibition of video, sculpture, drawing, painting, collage, and photography.

The University of California, Berkeley Art Museum and Pacific Film Archive (BAM/PFA) presents fer·ma·ta: The 37th Annual University of California, Berkeley Master of Fine Arts Graduate Exhibition, on view from May 18 through June 10. This exhibition is part of a tradition that has continued for almost forty years, in which M.F.A. graduates have the opportunity to present their work in the museum galleries and, in the process, gain valuable experience working in a professional museum setting.

fer·ma·ta takes its title from a musical term for a pause of unspecified length. It is the artists' way of reminding visitors that they should slow down, take a deep breath, and devote their time to the act of looking. The seven artists featured in the exhibition are Lindsay Benedict, Ali Dadgar, Kara Hearn, Bill Jenkins, Alicia McCarthy, Joe McKay, and Jenifer K. Wofford.

Kara Hearn and Jenifer K. Wofford draw upon some of the most familiar forms of popular culture in their work. Hearn explores the high drama of blockbuster films by creating fictional vignettes in which she is the star. Wofford uses the conventions of comics and graphic novels in her drawings that share immigrants' experiences with a larger audience.

Ali Dadgar's large-scale mixed media collages combine the universal with the personal, playing with ideas of inclusion and exclusion in the context of his own Iranian background. The personal also features in Alicia McCarthy's paintings -- in which she interweaves painted lines to suggest interconnectedness of her interactions with others -- and in Lindsay Benedict's photographic essay of "silent conversations.

" Bill Jenkins creates objects that are somewhere in between sculpture and drawings, often resembling relics that have been unearthed from a forgotten landscape. Joe McKay works in photography and video to create digital interventions in the urban landscape, which he presents through a utopian or dystopian lens.

Sunday, May 20, 3 p.m.
Artists' Talks - Gallery 3
Each of the artists featured in fer·ma·ta will speak informally about their work, and answer questions from museum visitors.