Thin Skin II: solo show. In the photographs, there is a morality play at work that generates an internal dialogue between the two separate axes in which the work functions. 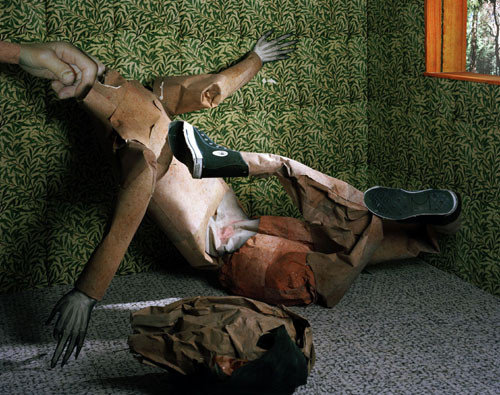 In the photographs of Daniel Gordon, there is a morality play at work that generates an internal dialogue between the two separate axes in which the work functions. On one hand, the work can be interpreted according to material medium: photographs of temporary sculptures pieced together from other photographs, usually found on the Internet. Gordon's work can also be read in terms of its subject matter: the highly personal quotidian grotesque that the work continually depicts. Far from creating a balance between the subject and the form it takes, Gordon's work uses this conflict to create a disjointed viewing experience. In Jacob and Justine the artist creates surrogate models of his brother and sister for the purposes of taking their portraits, and despite the materials from which they are constructed, they do indeed read as a personal contract between the artist and someone very close to him. In Birth Gordon speculates on his own origins, with results that are at once practical and fantastic.

Daniel Gordon's mis-use of photographic materials as a representational medium serves as a roadblock to the agreed-upon standards of beauty and quality that are a part of traditional photography. The cropped compositions call to mind documentary-style photography but because the sculptures are made solely to be photographed, nothing exists outside the border of Gordon's "decisive moment".

If Gordon's found internet photography is a ready-made and his subsequent use of it is an intervention, his unusual technique is not a method for deploying signs, nor is it simply a postmodern critique of the constructed image. Rather it attempts to retain its viability in the face of the ubiquity of that very critique. Justin Lieberman, artist.

Gordon was born in Boston in 1980 and received an MFA from Yale University. Thin Skin II is Gordon's first solo exhibition in New York.