Fragments for Georges Melies / Black Box / Chambre Noire. The show presents two of his most recent and to date largest projects. Recurring themes in Kentridge's art are history and memory, ethics, guilt and redemption. His melancholically poetic drawings and animations have already touched many visitors to art events and have been praised internationally. During the exhibition a screening of Kentridge's nine films in the series Drawings for Projection. 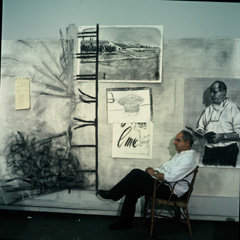 William Kentridge’s melancholically poetic drawings and animations have already touched many visitors to art events and have been praised internationally. This spring at Malmo Konsthall he presents two of his most recent and so far largest works: Black Box / Chambre Noire (2005) and 7 Fragments for Georges Melies Journey to the Moon (2003). The exhibition is the artist’s largest in Sweden to date and has earlier been showed at Moderna Museet, Stockholm, who also is the producer of the exhibition.

Recurring themes in William Kentridge’s art are history and memory, ethics, guilt and redemption. Raised in a white, prosperous, educated, anti-regime, Jewish family (his father and grandfather were both lawyers engaged in cases against the apartheid regime), he was automatically in a situation where he was both part of the system, and one of its critics – a complex relationship that is processed and reflected in his oeuvre.

The title Black Box / Chambre Noire refers to the black box in an aeroplane (which registers data in the event of a crash), the inside of a camera and the darkened cinema. The work, which Kentridge calls a mourning process, was originally commissioned by Deutsche Bank and the Solomon R. Guggenheim Foundation, and deals with the German colonisation of what is now Namibia, a virtually forgotten but dark chapter in history. In a massacre in 1904, which is regarded as one of the worst instances of genocide of the previous century, the Germans practically wiped out the whole population in the area. Black Box / Chambre Noire, was mostly built on site on Skeppsholmen, with the assistance of two stage technicians, and incorporates a theatre with two projections, six mechanical figures and some fifty drawings.

7 Fragments for Georges Melies Journey to the Moon was produced in 2003 at the BAC, Visby and now belongs to the Moderna Museet collection. The title alludes to the visionary film pioneer Georges Melies and his film from 1902, about a journey to the moon. In the work – which consists of eight video projections – Kentridge combines performance, film and animations in a homage to creativity. The fragments were made with materials that happened to be at hand and simple cinematic tricks. An espresso coffee pot serves as a spaceship and the “drawings” made by ants crawling in lines along a pattern made for them by the artist with sugar-water form the sky. Kentridge feels profoundly related to his centennial predecessor Melies and his creative urges, where the artist studio, despite its spatial and technical limitations, provides infinite potential. With imagination and inventiveness, anything can be used to portray a journey to faraw ay places. At the same time, he portrays an anxiety relating to the blank page, and Kentridge also gives us glimpses of a parallel story. The dreams of landing on the moon are in the same spirit as the dreams of colonising Africa, with the inherent ambitions of mapping the “dark continent”, taming it, “enlightening it”, and owning it. The original soundtrack is composed by Philip Miller.