In 1973 Jones was commissioned by the Sunday Times to illustrate a front cover article about the Harambee housing project in Islington, known as The Black House. This tall, dilapidated terraced house on a busy main street, had became a hostel for troubled young black men run by a charismatic Caribbean migrant, Brother Edwards. Photographs. 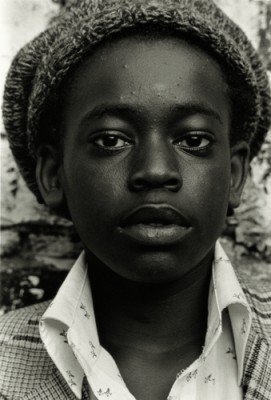 Thirty years since Colin Jones' seminal exhibition of The Black House at the Photographer's Gallery, we are proud to announce a new exhibition of one of the most volatile photography projects of the 1970s.

"When travelling from home to the Black House in the Holloway Road I was usually full of hope and optimism. On leaving I usually felt the opposite. I always seemed to go the same way. I passed places like Holloway Prison, Camden Town and Regents Park. Inside the park on my way home I felt that the Black House was another world - although it was only a mile and a half down the road it could have been thousands of miles away." Colin Jones

In 1973, Colin Jones was commissioned by the Sunday Times Magazine to illustrate a front cover article entitled On the edge of the Ghetto about the Harambee housing project in Islington, known as The Black House. This tall, dilapidated terraced house on a busy main street in Islington, had became a hostel for troubled young black men run by a charismatic Caribbean migrant, Brother Herman Edwards. The project was often visited by the police and always in strife with neighbours over too much noise and overcrowding. Many of the youths photographed embraced their portrayal in the media as iconic delinquents, reinforcing their status as outcasts. Never officially named The Black House, the building was given this name both by residents and by newspaper editors as an easy headline. At this time, the first generation of Afro-Caribean young people to be born in Britain were encountering problems with schooling, employment and the law - Jones' photographs put a face to this news story.

Following a grant from the Gulbenkian Foundation and the Arts Council, Jones continued to photograph the project until 1976 when it ended in disillusionment. The resulting photographs of rootless, alienated youth are no less haunting today than when they were taken. In 1977 they were exhibited in a controversial exhibition at the Photographer's Gallery and toured the country until the exhibition was vandalised in Leicester. This new exhibition is an opportunity to revisit the vanished environment of the Black House, preserved in the humanity and dignity of Jones' photographs.

Born in London in 1936, Colin Jones' creative life has followed an unusual path: From a working-class childhood in the East End of London to dancing in the English Royal Ballet, he bought his first camera on tour in Australia in 1958. He soon became a photographer for The Observer newspaper in 1962 and has since been published in The Sunday Times Magazine, Life, and National Geographic amongst others. He has documented a diverse range of subjects from the vanishing industrial working lives of the Northeast (Grafters, Phaidon 2002), to behind the scenes at the Royal Ballet, daily life in Communist Russia (Leningrad, Studio Vista 1964) and Great Rivers of the World (Hodder and Stoughton, 1988). Jones' work is held in collections at the Victoria and Albert Museum, London and the Arts Council and he has held solo exhibitions at the National Gallery of Art in Washington DC, and the Photographers' Gallery, London amongst others.