Gert and Uwe Tobias: Coloured walls form the setting for large-sized woodcuts, sculptural objects and paper works. Johannes Lotz presents works in paper and in tempera: waves of pen lines cover the surface of the drawings and form in the background copious fantastic landscapes, abstract ornaments or baroque interiors. 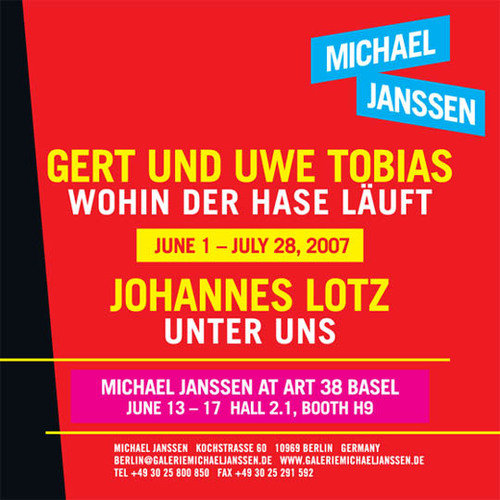 After two previous exhibitions of the twin brothers' works in Cologne (2004 and 2006), Michael Janssen now has the pleasure to present the third solo exhibition of Gert and Uwe Tobias (*1973) in his new Berlin gallery. Coloured walls form the setting for large-sized woodcuts, sculptural objects and paper works. The wall paintings, designed as a separate medium, create a spatial grouping of the works and bestow a museum-like impression upon the gallery.

In the language of their work, Gert and Uwe Tobias use the different traditions of constructivism and symbolism, folklore and handicraft in a superior manner. This powerful, yet at the same time, serious and heedless involvement of the traditional with elements of their subjective presence is in the meantime also recognized in the USA. There the artists were able to realise an exhibition (at the end of the year 2006) in the project room of the UCLA Hammer Museum in Los Angeles. The New York Museum of Modern Art (MoMA) has invited the twin brothers for a solo project next autumn.

In Europe, their works will be presented up to August 26 at Made in Germany in Hannover. A museum's exhibition showing the works of the two Romanian-born artists will open up in summer in Romania's cultural capital Sibiu/Hermannstadt. In the "Art Unlimited" section of this year's Art 38 Basel, Michael Janssen (in collaboration with Rodolphe Janssen, Brussels) will present a multi-pieced, large-scale installation of the Tobias brothers. During the fair, the gallery will showcase the release of an extensive publication with drawings, which is published by Snoeck Verlag.

Johannes Lotz' (*1975) first solo exhibition in the Galerie Michael Janssen Berlin is comprised of works in paper and in tempera. Waves of ballpoint pen lines cover the surface of the drawings and form in the background copious fantastic landscapes, abstract ornaments or baroque interiors. In the foreground they densify to form houses, people and mythical creatures.

What already presented itself in some of the drawings is continued in the paintings. Foreground and background cannot be clearly separated; the picture planes are completely covered with dynamic elements, that refer back to early cubistic and expressionist traditions. Structured in the same colourfulness and materiality as their surroundings, many of the title-inspiring figures free themselves from the mainly abstract pictorial carpet only on closer inspection.

Lotz sees his paintings as a 'translation of life'. His figures, that seem to be lost and isolated in their contorted surroundings, symbolise man, isolated in an ambiguous world full of contradictions. Johannes Lotz, who studied painting in the years 1995 to 2004, lives and works in Munich.