The artist's work focuses on industrial processes and materials. His objects and installations explore mechanical behaviors, materials, and physical properties of force. 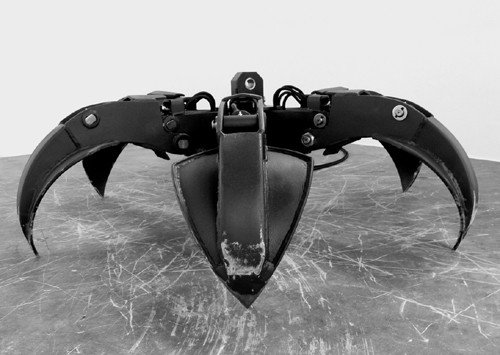 Arcangelo Sassolino 1967, lives and works in Vicenza and New York.
Galerie Nicola von Senger is pleased to present Arcangelo Sassolino’s first exhibition in Switzerland. This emerging Italian artist, like Max Bill or Carsten Höller, took a detour on his way to working in art. After studies in mechanical engineering, Sassolino took on a job in toy design at Nextoy-Asahi (Casio) in New York, where he soon began attending the School of Visual Art (SVA). These divergent paths culminate in an approach to sculpture that takes cues from the work of the great Minimalist artists such as Richard Serra, Walter de Maria, or Donald Judd, and which draws greatly from his experience in engineering and design.

Sassolino’s work focuses on industrial processes and materials. His objects and installations explore mechanical behaviors, materials, and physical properties of force. Each work takes careful planning and research and results in constructions that are stunning both in terms of their sheer physicality (material density, mechanical precision) and the forces (gravity, pressure, friction) which are applied by or to the object. The solid reality of the object, which represents nothing but itself, is subject to forces that question its physical solidity in time and space.

These forces are integral to the work and surpass its state of pure “objecthood.” A pressure tank containing nitrogen at over 200 bar is at once over half a ton of forged steel and a hidden danger of potential violence. Suspended from a wall on a single steel wire and a thin metal rod, a solid steel block becomes an act of balance, a statement regarding the nature of the object itself. These works carry an analysis of their own states (mass, solidity). They are not functional but functioning, constructed in an act of engineering that is neither expedient nor allegorical, but a symbolic practice of the real.

Sassolino’s objects simultaneously show human, technological accomplishment in all its beauty and lay bare its potential for destruction or failure. In Untitled (2006-2007), Sassolino modified a hydraulically powered claw to move its blades, like spider’s legs, in a random sequence. The steel blades act as levers which move the claw across the floor, its sharpened tips digging in and leaving long marks in the concrete. The violence of this material interaction, the unpredictable destruction of the smooth surface, contains both the exhilaration of the sheer force of the machine and the fear in dystopian visions of the mechanized age. Sassolino not only tests the limits of physics, but triggers a sense of alarm in the viewer that resonates in the empty space around each piece, which becomes saturated with the weight of our imagination.
Gregor Staiger, May 2007