A selection of pictures that Helmut Newton published in his own magazine between 1987 and 1995 are presented for the first time. The central exhibition room is dedicated to two (in)famous bodies of work, 'Tulsa' and 'Teenage Lust', that the photographer and film-maker Larry Clark created in the sixties and seventies. Lustrum Press was a publishing company founded by Ralph Gibson and through it Clark distributed his own photography books. 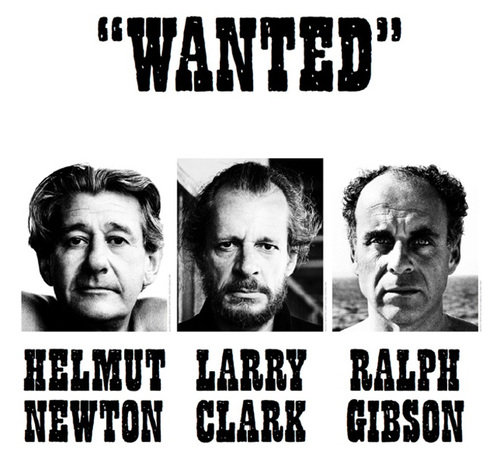 After the outstanding success of the three part exhibition, "Men, War & Peace", the Helmut Newton Foundation (HNF) presents the work of its founder alongside that of two of his friends and contemporaries, Larry Clark & Ralph Gibson.

A selection of pictures that Helmut Newton published in his own magazine "Helmut Newton's Illustrated" between 1987 and 1995 are presented for the first time as a complete exhibition in the front three rooms of the foundation.

The central exhibition room is dedicated to two (in)famous bodies of work, "Tulsa" and "Teenage Lust", by the photographer and film-maker, Larry Clark. Created in the sixties and seventies, Clark revealed to us the world of teenage sex and drug use in a way that had been taboo up until that time. In this he was the most influential predecessor of photographers like Nan Goldin and Richard Billingham.

Clark's provocative book "Tulsa" was published in 1971 by Lustrum Press. This publishing company was founded by Ralph Gibson and through it he distributed his own photography books, "The Somnambulist", "Déjà-vu" and "Days at Sea", amongst others, as well as books by leading photographers of the day. A representative selection of B/W & Colour images from these and later projects by Gibson, are presented in the remaining exhibition rooms. His timeless, subjective imagery is known for its formal and abstract composition.

Helmut Newton’s Private Property is a rare showcase of the photographer’s personal life. It includes films that shed light on the development of “Newtonian” imagery, a collection of the photographer’s cameras, accessories and other objects used in his photography. The famous customized “Newtonmobile” is on display, along with portions of his library and office from Monte Carlo. His numerous publications in magazines like Vogue, Elle, Vanity Fair, Paris Match, Stern and Der Spiegel, as well as 100 posters of Helmut Newton exhibitions from 1975 to the present document the development of his work.

The photographer’s affinity for his hometown Berlin – which he was forced to leave in 1938 – is depicted in original photos from his childhood and youth. This permanent display also chronicles Newton’s subsequent stops throughout his emigration up to his first fashion photos in Australia, which also feature his future wife June as a model.