In this assembly of unconventional wedding photographs, the idea of the bride varies as radically as do cultural differences, religious traditions, family dynamics, and modes of dress. Diane Arbus, Robert Mapplethorpe, Robert Gober and many more on show. 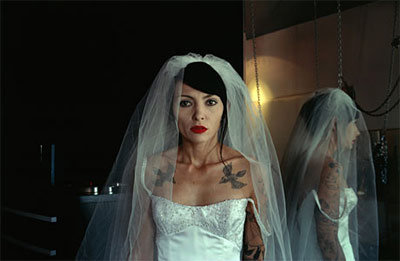 June Bride provides an uncommon look at a common practice: the marriage ceremony. In this assembly of unconventional wedding photographs, the idea of the bride varies as radically as do cultural differences, religious traditions, family dynamics, and modes of dress. Brides appear in various guises, from Diane Arbus' bride shrinking from her groom's overeager kiss to Nikki S. Lee's impersonation of a Jewish bride, from a bride captured in mid-air, as in Rosemary Laing's bulletproofglass series, to an earnest, middle-American bride in a family photo by Chris Verene.

The photographers of these varied works utilize and, at times, reformulate the image of the bride as a symbol of transition, ritual and traditional femininity. For example, in Arthur Tress' Stephen Brecht, Bride and Groom, New York, 1970, the actor plays the role of both bride and groom in the artist's exploration of gender and identity. In the photograph of his 1995 performance piece, To Marry a Mule, Chinese artist Wang Jin places a pink-painted and lavishly-adorned mule as a stand-in for his own "bride-to-be". There are larger narratives and diverse intentions behind these photographs, providing a glimpse into the ritual of marriage and allowing us to reflect on how we have come to view, define and transform the wedding ceremony.